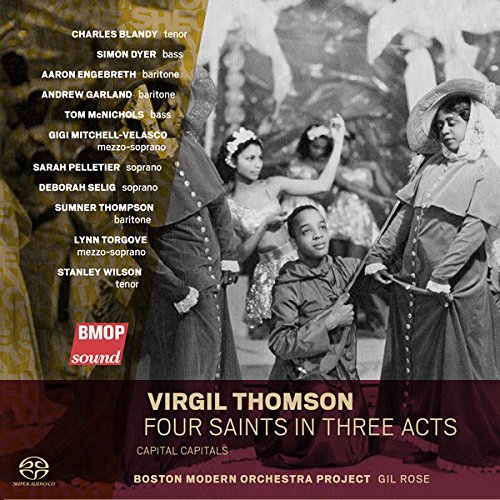 This recording is a fine example why I have come to love the work of Gil Rose and his Boston Modern Orchestra Project.  The scope of his musical choices ranges from intelligently selected new music projects by living composers and a fabulous survey of music by older composers that he considers worthy of attention again (and sometimes for the first time).  All BMOP recordings (even those on other labels) are consistently of the highest quality and the performances are definitive.  This series now on the orchestra’s own label is rapidly becoming a sort of canon defining modern music, or at least one vital vision of it.

There appear to be only two other recordings of this masterwork.  The first is a cobbled together mono version released on RCA with the composer conducting most of it and Leopold Stokowski conducting some numbers in this abridged performance.  The second is the very fine 1981 version by the Orchestra of Our Time under the able direction of Joel Thome.

The differences between these recordings is far less important than the fact that we now have three versions of this American operatic masterpiece for our listening enjoyment.  The BMOP recording is up to their usual high standards with wonderful sound and fine interpretation and musicianship.

This 1934 opera premiered in Hartford, Connecticut and then opened on Broadway (yes, in New York) with an all black cast and ran for a record 48 performances.  Black music pioneer Eva Jessye conducted her choir and the production was directed by a young John Houseman who had just begun to turn his talents to the theater.

The libretto is by Gertrude Stein who later collaborated with Thomson on The Mother of Us All.  Her word play is more about sound than grammar (or mathematics for that matter).  It is in four acts and features more than four saints.  The music is classic Americana with the essences of folk musics and spirituals.

This is a gorgeous and fun piece which deserves to be in the canon of great American operas.  Want to make America great and celebrate Black History Month?  Then grab this recording and sit back for a wonderful listening experience.