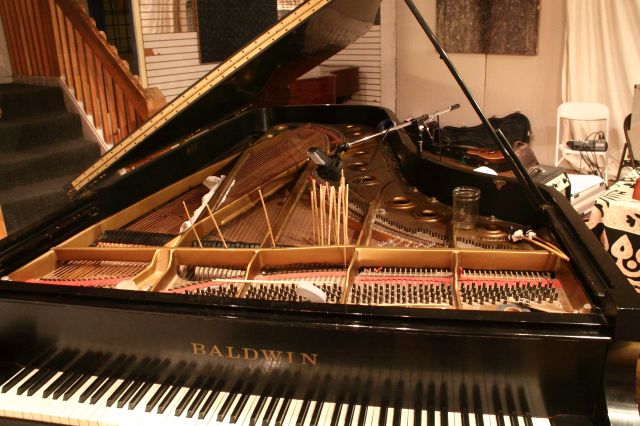 A view of the inside of the piano showing Lewandowski’s alterations.

It is easy to miss the nondescript storefront on University Avenue where this performance took place. And the promotion of this concert appeared to be mostly through Facebook and the Bay Area improvisers web site which resulted in a small but appreciative audience interested in hearing the work of Annie Lewandowski, now a music lecturer at Cornell. She is a graduate of Mills College. She has a varied resume ranging from classical piano to progressive rock bands and she presented tonight her work with extended piano techniques much like those of John Cage but with some distinctly personal twists extending Cage’s methods further. Ms. Lewandowski was hosted by Theresa Wong (also a Mills graduate), bay area composer, cellist and singer who organized the event and Luciano Chessa, San Francisco Conservatory professor, composer, musicologist, historian and performer and producer who played a couple of different roles in this evening. 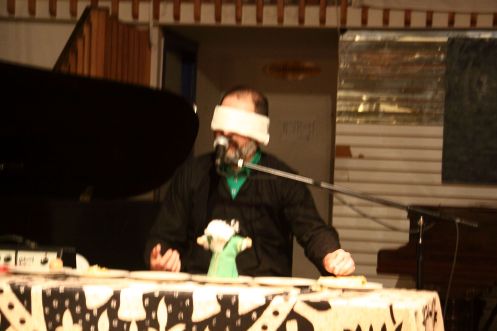 The first performance was introduced by Ms. Wong who informed us that Luciano Chessa had been kept in isolation for the last hour while the preparations were done for his performance. The piece being performed was Joan LaBarbara’s ‘Hear What I Feel’ from 1974. It consists of a table upon which there are several plates each containing some object or substance. The performer, who is blindfolded, is seated at the table and the performance consists of the performers reactions to the substances and/or objects he examines with his hands alone. It is performance art that would be perfectly at home with other Dada and Fluxus-like scores.

Wong led Chessa carefully from the back of the performance space to the table containing six plates. After seating him she positioned the microphone carefully in front of him. Chessa spent several minutes with each object examining three predominantly with his left hand and three with his right. All the while during his tactile adventure he vocalized a variety of sounds evoking (presumably) his emotional response to each object or creating an audio analog for them.

As with all such scores the result leaves a wide range of possibilities to the performer. And this performance was suitably humorous and engaging. Following his examination of the last of the objects Chessa removed the blindfold and reacted to each of the objects (without vocalizing) as he examined them visually. There was an effective combination of (mockingly?) serious concentration and idiosyncratic responses that left the audience genially amused and entertained. 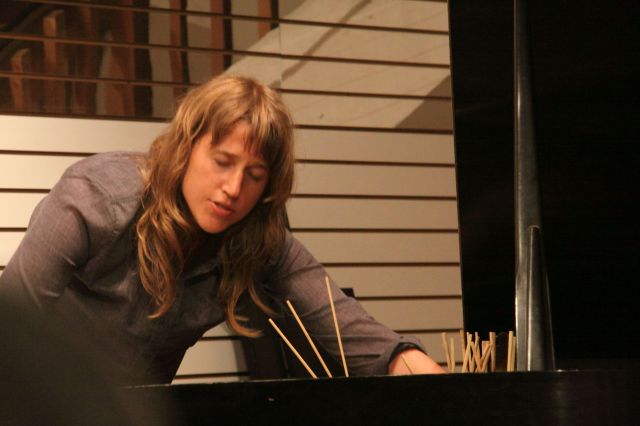 Annie Lewandowski playing in the piano, on the keyboard and singing. 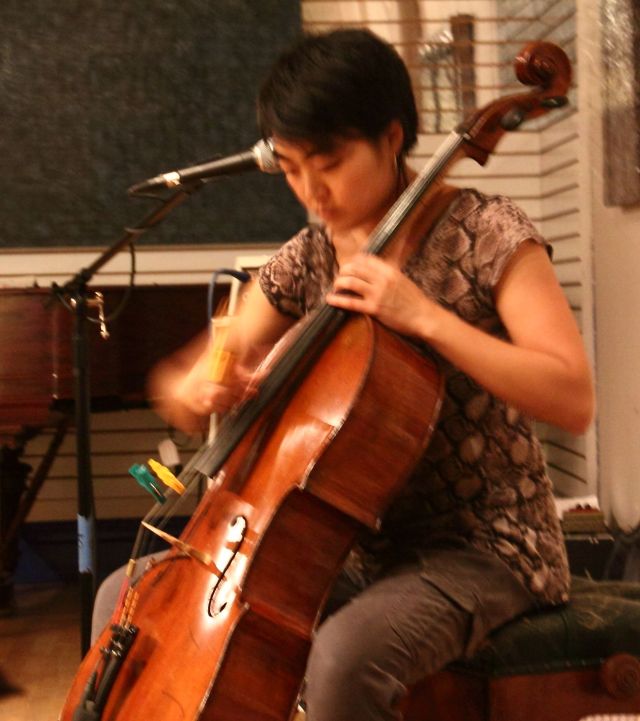 This was followed by a duet between Lewandowski and Wong. Both performers utilized various ways of altering the sounds of their instruments by adding objects to the strings or by exciting the strings with objects. Wong also made use of a foot pedal controlling some electronics. Lewandowski’s piano was miked and amplified somewhat.

The improvisation was started by Lewandowski with some percussive like sounds elicited at the keyboard. Wong responded sparely at first and the two seemed to trade ideas which became richer as the performance went on. Again the serious concentration was present as the performers carefully heard and responded to each others’ music making. While satisfying it was a sort of introduction or first taste of what was to come in the second half.

A brief intermission saw the performers mingling with audience members, many of whom were acquaintances and other musicians. 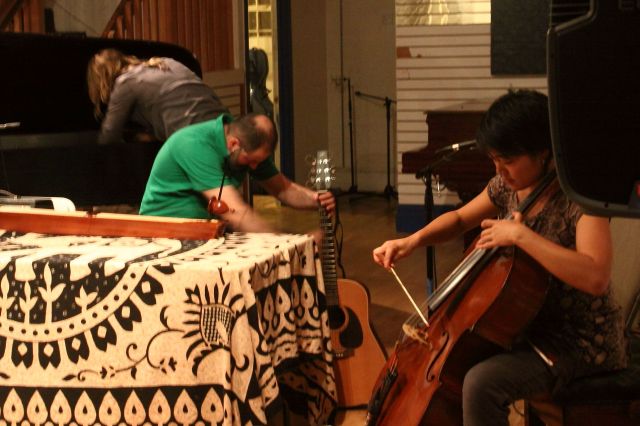 What concluded this unusual program was a trio for all three performers. Lewandowski with her prepared piano, Wong with her altered cello, Chessa with his signature Vietnamese Dan Bau and guitar. All three also sang. The performance started sparely as each introduced suggestions or themes for the improvisation and reacted to them.

Lewandowski gave a much fuller exposition of the possibilities of her instrument playing the keyboard, inside and all around the piano as well as singing. Wong also seemed to use a wider amount of sound possibilities in her playing. Chessa played the traditional Vietnamese folk instrument in all but traditional ways using devices to excite the strings and focusing on tuning and even some percussive possibilities. At one point he left the table where he was performing to pick up an acoustic guitar. After picking a few notes he walked to the back of the stage area and ascended a stair case leading to a sort of balcony that surrounded the performance space. It was at this point that he began softly singing what sounded like an Italian folk tune as he played the guitar in a most traditional manner. This gave a collage effect to the performance juxtaposing the most traditional kind of music making with the extended and experimental sounds.

Chessa remained on the balcony for a bit, then descended the staircase again and returned to the more unusual playing methods at first on the guitar and then back at the table on the Dan Bau. Following this Lewandowski began vocalizing a melody with sparse accompaniment that would have been perfectly at home in a scene from ‘Eraserhead’ at times. She was echoed by Wong’s extended vocal techniques at first and then Lewandowski and Wong began singing a more traditional sounding melody with beautiful harmonizations interpolating this singing at different points while still traversing their freely improvised instrumental playing supported by Chessa on the Dan Bau.

This made for a rather tranquil mood as they ended the second half of the concert. The audience was appreciative. And this writer was pleased to have found a gem of a concert experience by young, serious (but good-humored) and accomplished musicians in the eclectic world of the east bay.