Vegan chef and shakuhachi player Philip Gelb’s dinner/concerts have been one of the great joys of the east bay for over ten years now.  Regular readers of this blog will be familiar with my enthusiasm for this series.  Once again Gelb has woven magic in his impeccably creative vegan cuisine and his ability to attract astoundingly talented musicians. 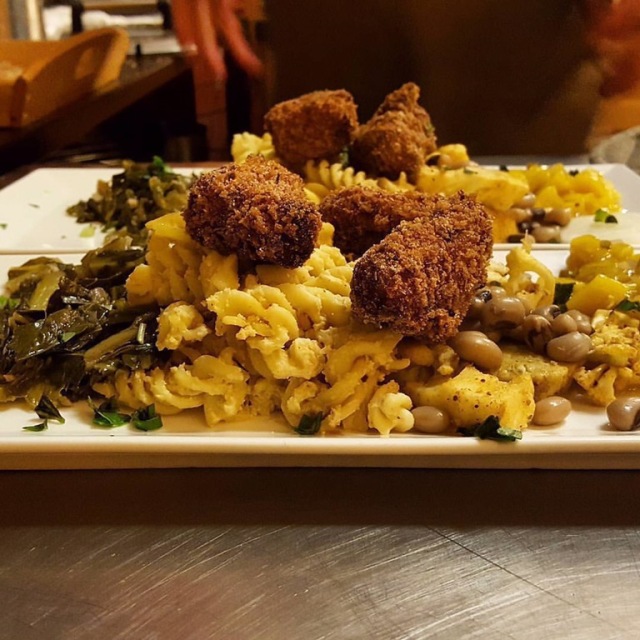 I had to steal this photo from Phil’s Facebook page because I got so caught up in the fine conversation and food that I forgot to take pictures of any of the five courses except for the dessert.

Four wonderful food courses preceded the musical segment of this evening beginning with a hearty soup followed by some deliciously roasted brussel sprouts and the main course of vegan mac and cheese with deep fried tempeh.

Here is the menu:

“Cheesy” broccoli chowder (practically a meal in itself).

Southern Fried Tempeh, Macaroni and “cheese” with stewed greens, black eyed peas, Cajun roasted cauliflower, pickled daikon with Meyer lemon and mango chutney (pictured above but must be tasted to be believed, excellent!)

Chocolate waffle bowls withsoursop coconut ice cream, mango ice cream, blood orange marmalade, pineapple sauce and maple walnuts (all vegan and sinfully delicious)
As is customary in these events the musicians played just before dessert was served.  A word about these musicians.  Sameer Gupta , now heading up the wonderfully creative fusion ensemble Brooklyn Raga Massive hails from San Francisco.  David Boyce is originally from New York but is now based in the Bay Area, has appeared on numerous recordings and his band, The Supplicants, can be heard in the Bay Area.  Both are seasoned and extremely creative musicians.

Gupta began first by tuning his four drums (instead of the customary two found in most Hindustani music) and created bell like sounds as well as a rhythmic pulse before Boyce entered with his mellifluous sax.  The music, clearly informed by melodic jazz and by traditional Hindustani elements took off in a high energy duet and became a unique and wonderful music which clearly energized the audience.  The two had played together before though not in this particular configuration.

Here is a short video sample:

Three improvs were performed, one each with Boyce on soprano sax, tenor sax and bass clarinet.  This unusual duo pairing sounded remarkably comfortable.  They have performed together before and one could sense it in how well they meshed their individual styles.

The audience was understandably enthusiastic and appreciative after each performance.  The combination of these fine musicians, clearly enthused about their music, and the intimate setting of this West Oakland loft made for a powerful experience, among the best this writer has heard in this venue.

Also worthy of mention was the amicable atmosphere with friendly interesting fellow diners, a common experience in this series. 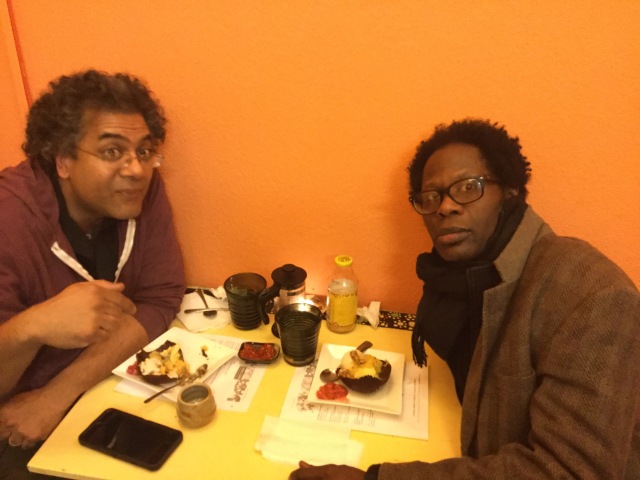 Gupta and Boyce enjoying the vegan ice cream dessert after their performance.

Missed this one?  There is another dinner concert featuring Mitch Butler on trombone and Howard Wiley on saxophone on Wednesday March 15th.  Menu not yet announced.  I hope you can make it.