Disruptions, dissatisfactions and even stronger reactions are not actually that uncommon in classical concerts. But some of these disruptions have taken on a sort of mythical dimension while others remain lesser known. The significance of these disruptions is usually based on failure of expectation or fulfillment of a foregone conclusion. Either the audience is unpleasantly surprised by the music or they come with preconceived notions of the inherent difficulty and/or insignificance of modern music. I think that these events signal a revolution not so much in music as in hearing. Audiences’ horizons are being expanded and many rebel against being taken out of their comfort zones. It is much like the paradigm shifts in science delineated by Thomas Kuhn in ‘The Structure of Scientific Revolutions’. Indeed some of these concerts seem to signal aesthetic revolutions. May 29th, 2013 will mark the 100th anniversary of the first performance of Igor Stravinsky’s ‘The Rite of Spring’ at the then newly constructed Champs-ÉlyséesTheatre in Paris. The performance was a dance concert with the Ballets Russe with the mercurial Vaclav Nijinsky and with choreography by Serge Dhiagalev and sets by Nicholas Roerich with Pierre Monteux conducting the orchestra. The audience reaction disrupting the performance and the composer subsequently sneaking out the back way is the stuff of legend now (if not strictly truth). The public and the news media love anniversaries so it is no surprise that a great deal of writing, lectures and concerts fill this, the year of that anniversary.

The score went through several revisions (1921, 1926, 1929 and 1943). It is the 1929 score that is the one most performances now follow. Curiously the 1943 revision of the Sacrificial Dance has never been performed as far as I can determine. The Paul Sacher Foundation is making the 1913 version of the score available for the first time in celebration of the centennial.

The first work on that concert was a performance of Les Sylphides, a ballet consisting of piano music by Frederic Chopin orchestrated by Alexander Glazounov. For this concert orchestrations were commissioned from Anatoly Liadov, Nicholas Tcherepnin, Sergey Taneyev and Igor Stravinsky. It was followed by the Hector Berlioz 1841 orchestration of Carl Maria von Weber’s piano piece,’Invitation to the Dance’ (1819). This certainly satisfied mainstream expectations but provided a stark contrast for the next work which was the now infamous Rite of Spring. In the tradition of well-trained professional performers the musicians and dancers continued in spite of the disruptions and even concluded with another tamer work, the ‘Polovetsian Dances’ from Alexander Borodin’s Opera ‘Prince Igor’ (1887).

Almost two months before on March 31, 1913 there was a concert in the Musikverein in Vienna by the RSO Wien (Vienna Radio Symphony) under the direction of Arnold Schoenberg. Alex Ross brought this incident to my attention in his blog. The music on the concert was Anton Webern’s ‘Six Orchestral Pieces’ (1909-13), Alexander Zemlinsky’s ‘Four Songs on Poems by Maurice Maeterlinck’ (1913), Arnold Schoenberg’s ‘First Chamber Symphony in E major Opus 9’ (1906, played in version with an augmented string ensemble of 1913), two (out of five) of Alban Berg’s ‘Altenberg Lieder Opus 4’ of 1912 (“Sahst du nach dem Gewitterregen den Wald”, op. 4/2 and “Über die Grenzen des All”, op. 4/3) and the last programmed (but not played due to the police shutting the concert down) first of Gustav Mahler’s ‘Kindertotenlieder’ (1904). Photo of Arnold Schoenberg in Los Angeles, believed to be taken in 1948. (Photo credit: Wikipedia)

Even before this there was the unwelcome reception of musicians and audiences to Claude Debussy’s 1902 opera ‘Pelleas and Mellisande’. Both the musical language and the frank treatment of sex in the libretto contributed to the initial hostile reception. Of course the work is now acknowledged as a masterpiece.

The 1926 première of George Antheil’s ‘Ballet Mecanique’ (1924) in Paris was promoted as radical new music seemingly to create another controversy like that of the Rite of Spring some 13 years before in the very same theater. As near as I can determine there was only one other work on the program (Symphony en fa) and it is not clear whether or not it was the first or last piece on the program (though I suspect it was last). The audience was clearly divided and perplexed by the music and likely also by the technical failures that occurred in this complex work whose demands on mechanically operated instruments wouldn’t actually be executable as the composer intended until the year 1999 . The première in Carnegie Hall New York in 1927, again a concert entirely of Antheil’s works also created controversy and supposedly the controversy continued outside the concert hall with some minor rioting in the street. This concert was duplicated by conductor/historian Maurice Peress and recorded on CD. That concert began with the 1925 Jazz Symphony (played by the W.C. Handy orchestra) followed by the 1923 Sonata for Violin, Piano and Drum and then the String Quartet of 1925. The second half of the concert contained the Ballet Mecanique. While both the Paris and New York premieres were significant and somewhat controversial they did not quite have the impact of the Rite of Spring.

On August 29th, 1952 pianist David Tudor performed one of the most controversial musical pieces of all time. In Woodstock, New York audiences sat (mostly perplexed) as Tudor opened and closed the lid of the piano and marked time with a stopwatch. It was the première of 4’33” by John Cage in the aptly named “Maverick” concert hall. Kyle Gann writes in his book, ‘No Such Thing as Silence’ (written in commemoration of the 50th anniversary of the première) that, like the Schoenberg concert, the program consisted of other contemporary pieces. Morton Feldman’s ‘Extensions 3’ (1952) began the program followed by one of the pieces from Christian Wolff’s ‘For Prepared Piano’ (1951) and then the very complex Piano Sonata no. 1 (1946) by Pierre Boulez.

Cage’s was the penultimate work which was followed by Henry Cowell’s ‘Banshee’ (1925). The concert was followed by a question and answer session. There was no riot in the cool intellectual atmosphere of this concert venue but Gann states that one artist exclaimed at one point, “Good people of Woodstock, let’s run these people out of town.”

John Cage would have a much more unpleasant experience at the hands of the New York Philharmonic with the première of his ‘Atlas Eclipticalis’ (1962). On February 9, 1964 under the baton of Leonard Bernstein this piece was performed as part of a series of contemporary pieces played by the orchestra that year. Concert programmers sandwiched the work between performances of Vivaldi’s ‘Four Seasons’ and the Tchaikovsky 6th Symphony.

Benjamin Piekut, in his excellent book, “Experimentalism Otherwise”, investigated the circumstances surrounding this concert attempting to separate history from legend by interviewing some of the musicians who participated. He reports that there were technical problems with contact microphones, mixing consoles and amplification. But there was also rebellion by the musicians some of whom destroyed the contact microphones and/or declined to play the notes provided. These technical issues which occurred seem similar to the Antheil concert in that technology was behind the composer’s intentions but the willful destruction and misuse of the technology by the musicians themselves suggests an added level of hostility which of course did not help the audience’s reaction which was anything but favorable.

A 1971 concert by the Boston Symphony under Michael Tilson Thomas included a work for 4 organs and maracas by Steve Reich. The piece, titled simply ‘Four Organs’ (1970) is a study in ‘augmentation’ the lengthening of notes and musical phrases, stretching time as it were. The maracas simply play steady 8th notes creating a pulse that the musicians can count. They wind up having to count up to 120 beats at times and concentration is paramount in a successful performance of this music. 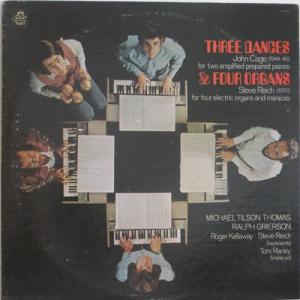 The first recording of Four Organs

The piece had been premiered at the Guggenheim Museum in 1970 and was reportedly pretty well received. The context of a new music concert in a non-traditional venue no doubt contributed to the more favorable response because the audience was expecting a challenge. Reich was skeptical about the presentation of this music in a more traditional venue and indeed he was correct in assuming that it would receive a different response.

The theme of the concert was ‘multiples’. The first piece on the program was the Sinfonia for two orchestras by Johann Christian Bach (one of the sons of J.S. Bach). It was followed by Mozart’s Notturno for four orchestras and the Bartok Music for Strings, Percussion and Celesta of 1936. Again the newest and most controversial piece would hold the penultimate position followed by Franz Liszt’s Hexameron Variations for six pianos. Michael Tilson Thomas, who was at one of the farfisa organs (along with the composer, Ayrton Pinto and Newton Wayland), reports that there were wide differences in the reactions to the music, a great deal of noisy reactions both pro and con. Thomas appeared to like the music (and likely the reaction to it) well enough to program the piece again in 1973 in New York’s Carnegie Hall to an even more hostile response which, according to Thomas, included a woman who came to the stage and banged her head against it saying, “Stop, please, I surrender”. Clearly the issue here in not one of technology but definitely one of failure to meet expectations of many listeners. It was a very different sound especially in the context of the concert hall and programmed with far more conservative music preceding and following it.

These are just a few of the most prominent such responses in the twentieth century. One is left to wonder when and where such a strong reaction might occur again. It is one of the joys, I believe, of going to concerts. The audience response is a valuable part of the experience.

4 comments on “Right of Spring, Left of Spring but Not Necessarily in Spring”