A few of months ago received my copy of the newly minted CD by pianist/composer Samuel Vriezen.  This is one of those crowd-sourced projects on Indiegogo .  The disc consists of a new recording of a sort of minimalist classic and a new works by the pianist, Within Fourths/Within Fifths (2006) which is, essentially his artistic response to this piece.  The piece is dedicated to Johnson. 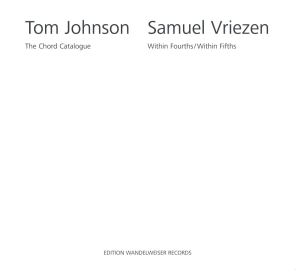 This is only the second recording of the Tom Johnson work committed to disc. That by itself is an achievement. The first was recorded by the composer and released on XI records in 1999.  That recording clocks in at about one hour.  By contrast Mr. Vriezen’s recording takes only about 30 minutes to play the piece.  Johnson, who is also known as the former music critic for the Village Voice is one of the few composers who actually embraces the term “minimalist”, in fact he was there witnessing the very birth of that style during his tenure at the Village Voice (1972-1982).

The Chord Catalog (1985) consists of, in order, all the possible chords in a single octave that are possible with two notes, three notes, four notes, etc. up to 13 notes with the doubling of the octave.  That’s a total of 8178 chords. This sounds like a potentially bland academic exercise like many minimalist or process music concepts.  No tempo is specified in the score.  It is an important piece which may not appeal to all audiences but will likely entertain anyone whose listening interests lie in the realm of minimalism, process music and conceptual art. 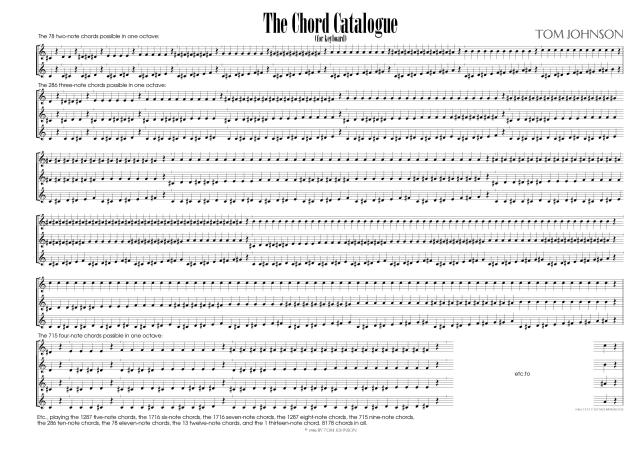 According to Kurt Gottschalk in his article for I Care If You Listen Johnson is a fan of Vriezen’s interpretation and, in fact, is one of the many contributors to the project.  Vriezen has been performing the piece for about 10 years now in public concerts and he posted a video of a performance of Chord Catalog with commentary by Tom Johnson and himself.  There are also scenes of Johnson with Vriezen as he performs a portion of Within Fourths/Within Fifths.

Vriezen’s piece by contrast lasts about 45 minutes and, though using similar methods, produces a different sound world.  He correctly describes the piece as lyrical and it is a wonderful piece on its own, more wonderful in context with its predecessor.  This disc is an artistic dialogue, a call and response between to kindred spirits of different generations.

Samuel Vriezen is a Dutch pianist, composer and writer born in 1973.  His web site lists his compositions and writings and there are downloadable mp3 files and scores.  There is also a Vriezen page on Ubuweb which contains mp3 files and pdf files of several of his pieces and includes useful program notes.  He also produced Johnson’s CD Symmetries (1980) featuring Vriezen and fellow pianist Dante Oei on Karnatic records.

This is the solo début recording by a composer and pianist with keen instincts and talents that leave this reviewer in excited anticipation of what he  will do next.  I am also proud to have sponsored this wonderful recording.