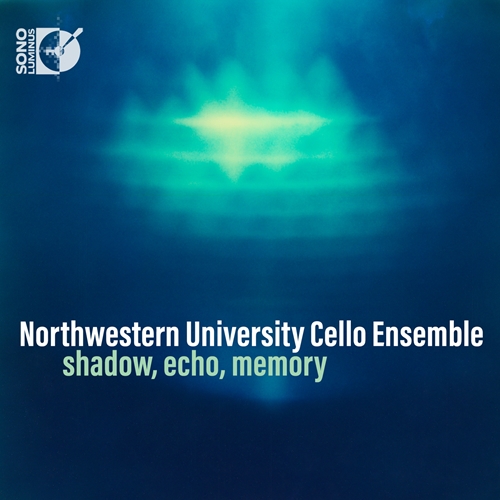 When touring musicians need to augment their performances with additional musicians they very naturally turn to the local college music departments where one can find oodles of musicians more than willing to perform just about anything.  Colleges regularly put together large groups of trumpets, horns, violins, etc. as performing ensembles for pedagogical reasons.  Lately some of these groupings seem to be attempting to assert themselves as stand alone performance ensembles outside of the school.  There have been a few cello ensembles such as Conjunto Iberico who have recorded a few albums but this grouping is still relatively uncommon.

This album may change that.  Doing what they did for chamber choir in Crossing Over (reviewed here), Sono Luminus is doing its part to bring the cello ensemble into a more mainstream position in the classical market.  The eight pieces distributed over ten tracks on “shadow, echo, memory” are mostly transcriptions of works originally written for different forces but they are so well done and executed that this eclectic collection of pieces sound almost as if they were born to be played by a cello ensemble.

The opening work, Three Lacquer Prints by Zachary Wadsworth (1983- ) is a three movement set of miniature tone poems which describe poetry enhance block prints by Amy Lowell.  These neo-romantic pieces by this interesting young composer serve as a gentle introduction to the program.

Après un Rêve is an 1877 song by Gabriel Faurè here arranged by Roland Pidoux for eight celli with solo cello.  It is a lyrical and romantic little piece which continues the mood set by the first work.  Gabriel Cabezas handles the solo part beautifully in this creative re-imagining of this classic art song.

Michael van der Sloot (1991- ) is a student of this ensemble’s conductor Hans Jørgen Jensen takes this program to a more modernist place with this composition from which the album takes its title: Shadow, Echo, Memory.  It is scored for 21 celli and makes very effective use of some extended instrumental techniques but remains in a basically neo-modern/neo-impressionist style which is not so experimental as to scare listeners and makes intelligent use of technique to create some really amazing music.  It is a lovely and evocative piece which attempts to describe Ice Age paintings seen by the composer.

The next piece is a real gem and crowd pleaser which has been transcribed for quite a few different ensembles over the years.  Rachmaninoff’s Vocalise (1915) was originally written for (wordless) voice and piano.  It is here transcribed for cello ensemble with soloist (ably and lyrically played by Joseph Johnson).  This is a gorgeous piece which works beautifully in this arrangement.

The German born, Chicago-based composer Hans Thomalla (1975- ) is a name unfamiliar to this reviewer.  He is an associate professor at Northwestern University and a fascinating new compositional voice.  His Intermezzo is excerpted from his 2011 opera, Fremd (Strange) which is based on Jason and the Argonauts.  It is one of the mo re modernist pieces here in a similar vein to Shadow, Echo, Memory with tactful and effective use of extended instrumental techniques in a basically neo-romantic texture.

Aaron Jay Kernis (1960- ) has a great track record of producing very listenable and entertaining music.  This Pulitzer Prize winning composer writes in a sort of neo-romantic style and this piece puts one in the mind of Samuel Barber’s at his most lyrical and romantic.

Gyorgy Ligeti (1923-2005) is a composer whose modernist music came into my consciousness through its use in Stanley Kubrick’s 2001: A Space Odyssey.  The transcription of his choral piece Lux Aeterna (1966) is, for this listener, one of the most exciting tracks on this album.  The notes do not say who did this arrangement but it is an effective re-visioning of this modern classic.

The finale is this lovely transcription (for cello ensemble with harp) of Mahler’s post-romantic Adagio from his 5th Symphony.  This is a crowd pleaser but there is nothing light weight about it and the performance is heartfelt and full of passion.

The recordings were done in Northwestern University lovely and acoustically near perfect Pick-Staiger Hall.  Recording, mixing and mastering are done wonderfully by Christopher Willis.  This is a spectacular recording highly recommended for both sound and content.