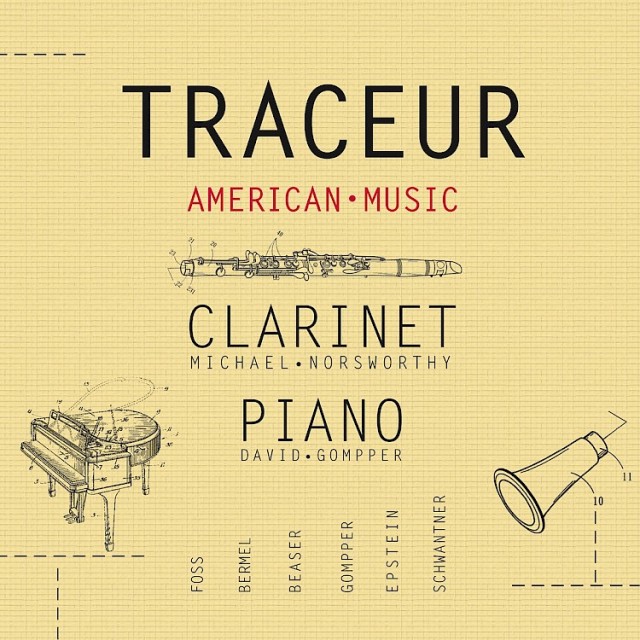 This is a nice little program of pieces for clarinet and piano by 20-21st century composers. It might even be a representation of the state of the art for this genre.  All of these pieces are basically tonal and would work well in a recital.

Michael Norsworthy, professor of clarinet at Boston Conservatory at Berklee has an impressive set of credentials in the interpretation and performance and teaching of new music.  This performing academic has quite a list of recordings to his credit.

David Gompper is a composer and pianist with a similarly extensive set of credentials in support of new music (his own and others’).

The disc opens with a six movement suite of short pieces by Robert Beaser (1954- ) called, Souvenirs (2001-2).  Beaser is one of the finest composers of his generation and his tonal style was a hallmark of his work from the very beginnings.  These short, personal sketches are a delightful example of his work.  These pieces were originally written for piccolo and piano and are here presented in the composer’s transcription for clarinet and piano.

The next piece, Black Anemones (1980) is originally for flute and piano and is a sort of modern classic (here is a recent review of the flute and piano version).  The Pulitzer Prize winning Joseph Schwantner (1943- ) is also among the finest composers working today. This transcription for clarinet by Mr. Norsworthy will most certainly guarantee further performances.  This is truly lovely music inspired by poetry of Agueda Pizarro.

Three American Pieces (1944-5) by Lukas Foss (1922-2009) are another sort of classic set of pieces.  These are early compositions in a neo-classical/nationalist style characteristic of this period of Foss’ compositional style.  It is great to have a new recording of these entertaining pieces.  Foss is due for a reckoning I think.

Marti Epstein (1959- ), also a professor at Berklee was represented in an earlier review of a disc (here) dedicated entirely to her gentle music imbued with memories of her upbringing in the great plains of the Midwest.  Nebraska Impromptu (2013) is characteristic of this composer’s gentle but substantial music.  Her website also contains a very interesting occasional blog that is worth your time.

Derek Bermel (1967- ) is here represented by schiZm (1993-4).  Originally for oboe and piano the composer also made this transcription for clarinet and piano.  Bermel describes some of the fascinating techniques that underlie the structure of this two movement piece but the result of those techniques is a very interesting piece of music.

Last but definitely not least is the title track Traceur (2014-5) by composer/pianist David Gompper (1954-).  It is the longest and most complex of the pieces presented and requires the most involvement on the part of the musicians as well as the listener.  I don’t mean to imply that this is difficult music because it isn’t.  It is substantial music whose charms demand close listening, an effort for which one will be rewarded.

This lucid recording was produced by Norsworthy and Gompper (with the assistance of Robert Beaser in the recording of his work).  It was recorded in 2015 with editing and mastering by Patrick Keating.  Very nice disc.  Highly recommended.