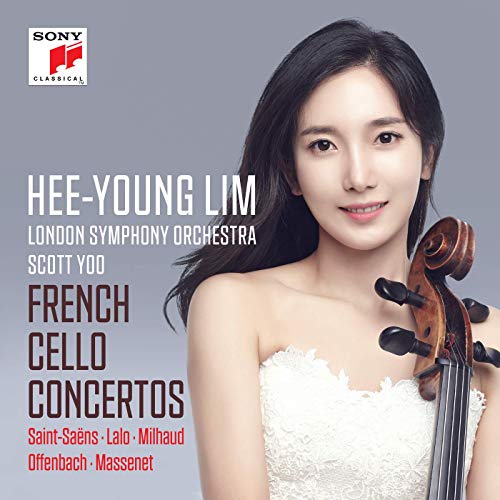 Normally I don’t review a lot of popular best seller CDs or recordings of music written before 1900 (I like most all music but that I just don’t think I have much useful to say about it) but this one has the happy exception of including a 20th Century work and it is an example of truly thoughtful and creative programming.

This is the major label debut of Korean born cellist Hee-Young Lim.  She is, according to her website, currently professor of cello at Beijing Central Conservatory.  With this disc she demonstrates her facility with the technical aspects of her instrument as well as a gift for interpretation.  In addition she is known as an advocate of new music, hence the inclusion of the Milhaud Cello Concerto.

This is such a delightful disc combining two lesser heard major cello concertos with some tasty filler material.  But the real gem here is the too rarely heard Milhaud concerto of 1936.  Wow, what a great work!

The disc opens with a true classic, the Saint-Saens’ (1835-1921)  Cello Concerto No. 1 of 1872.  This is one of the great concertos for the instrument.  It is not heard with the frequency of say the Dvorak concerto but it is every bit as good and as challenging.  Ms. Lim handles this romantic gem with both ease and grace.

The second offering is a real rarity, the Cello Concerto (1877) of Èdouard Lalo (1823-1892).  It is not clear why this major work gets heard so rarely (Lalo’s work is way overdue for a reappraisal and some recordings).  It is a wonderful romantic era concerto and Lim handles it like the seasoned professional she is.

The highlight of this disc for me personally is the also rarely heard Cello Concerto No. 1 (1934) of Darius Milhaud (1892-1974).  It is one of two such works by the wonderfully prolific composer.  This work is surely recognizable for some modernist features (Lim seems quite comfortable with the more modern idiom here, a mark of a master it would seem).  Maybe a little dissonance here or there but this is basically a post-romantic work with appropriate nods toward some modernism.  The point is that it is an expressive work that deserves a place in the repertory.  Hopefully this recording will contribute to helping this music achieve its deserved place in history.  And of course there’s the eager anticipation of her recording the second Milhaud Concerto for Cello.

Scott Yoo conducts the always competent London Symphony.  The useful and well written liner notes by James Inverne are so well researched and written I won’t complain about the microscopic typeface.  The sound is handled well by engineer Jin Choi at the iconic Abbey Road Studios in London town.

The multilingual program notes suggest that this disc looks forward to an international reputation for this fine young artist and it looks/sounds like that is what is happening here.  Let us welcome her to the international music community and look excitedly forward to hearing more from her.  Brava! Ms. Lim!