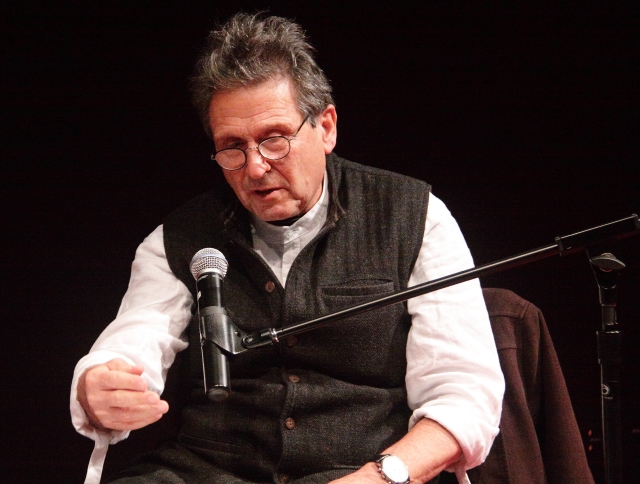 Curran in Conversation at the Brower Center in Berkeley, 2016

Alvin Curran (1938- ) is a composer, performer, innovator who makes him home in Rome, Italy but his connections to the Bay Area happily bring him back from time to time.  This time there is the opportunity to see him in the intimate setting of a house concert at new music aficionado Harry Bernstein’s Berkeley home.

Curran was previously reviewed in these pages here,  here, and here.  My favorite tribute piece featuring his politically and socially charged Crystal Psalms can be found here.  Rather than go into this man’s fascinating career I will refer the reader to the Wikipedia page linked above.  It also contains links to Curran’s personal page which is also very informative.  Suffice it to say that this writer believes him to be one of the most important composers of the late 20th and early 21st century.

My apologies for this late publication but anyone interested in  new music and artists of the Bay Area owes it to themselves to try to attend this event today Saturday March 7th at 8PM.  He will be joined by another local musical star, percussionist extraordinaire William Winant.  You can inquire and/or pay by paypal at: harry@fullplatemedia.com.  The ticket price of $50 includes the concert and a nice wine and cheese table at intermission..

As if this weren’t enough of a treat, Mr. Curran’s wife, Dr. Susan Levenstein will be reading from her upcoming memoir “Dottora” at Moe’s Books on Telegraph in Berkeley on Tuesday March 10th at 7PM.  Levenstein is a physician who is actively involved in coordinating some of Curran’s busy schedule and website and this volume sounds like it will tell some interesting history as well as give some insight to Levenstein herself.

My own schedule sadly prevents me from attending but I can’t wait to hear about this wonderful evening.