The original incarnation of three classical singers with the same range performing as an act was that of the late Luciano Pavarotti, Placido Domingo and Jose Carreras.  I seem to remember a similar act with three Irish tenors that followed on their model.  Well what we have here is a far more unusual and very historically significant collection of three counter tenors, that voice range of male falsettos roughly corresponding to mezzo-soprano in range.  This is certainly one of the least common type of vocal artist but what makes this a unique historical event is that all three are African-Americans (to use the currently politically correct term).  They’re not performing as an act, though.  They are all starring in a single opera which makes this event even more compelling.

This will happen in the context of performances of Henry Purcell’s 1689 opera, “Dido and Aeneas” in Los Angeles.  I include this in this new music blog because it is certainly a new occurrence and it fits well with my ongoing survey which has looked at black composers since the 1964 Civil Rights Act.  Of course this event puts the focus on black performers, an area which I have not attempted to explore.  But is is nice to see this happening in the 50th anniversary year of that landmark legislation.

I only came upon this information when a highly valued friend based in Oakland, Bill Doggett, who is acting as a consultant to the L.A. Opera alerted me to this historic first.  He recently curated a well received exhibition in the Grand Foyer at the San Francisco Opera at the performances of Porgy and Bess.  Bill is a concert producer, strategic marketer, consultant, arts advocate and lecturer whose work promotes black classical artists.  It was he that suggested that this event would fit with the themes developed in my previous blogs.  I did share with Mr. Doggett my experience seeing Mary Zimmerman’s beautiful production of Philip Glass’ Akhenaten in Chicago which featured a black counter tenor named Geoffrey Scott whose name, sadly, seems to have disappeared from the web except for that production.  What was curious about that is that I vividly recall the audience’s reaction when he first came on stage.  It is perhaps more historically accurate to cast a black man as an Egyptian Pharaoh but the audience seemed shocked by his appearance and I didn’t feel that it was just because of his vocal range. 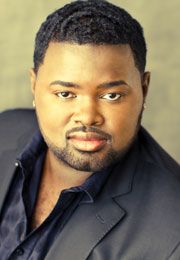 The three singers in this new production include John Holiday, Darryl Taylor and G. Thomas Allen all of whom are making their début performances with L.A. Opera.  Holiday, who will sing the role of the sorceress was the third place winner in this year’s Operalia, a competition founded by  Placido Domingo for singers aged 18-32.  Taylor and Allen will sing the roles of the witches in a production which, as far as I can tell will be the first time three black counter tenors will be appearing on an opera stage  in  the history of the art form.  Taylor is a voice teacher on faculty at the University of Michigan at Ann Arbor  and Allen appears to be a rising star whose art we will see at an early point in his career.

Correction: Darryl Taylor is now Associate Professor of voice at Claire Trevor School of the Arts  University of California,Irvine.

This performance will be a double bill with the other half of the program being a production of Bartok’s Bluebeard’s Castle.  The productions will run from October 25th to November 15th.  Below I am sharing the press release of this historic event.  One hopes that this historic first will shed a more sympathetic light in these embattled times where, in spite of such wonderful historic performances, we endure a correspondingly negative series of news events like those in Ferguson, MO, New York and so many other places where the value of black lives seems to be at a very low ebb.

5 comments on “The Three Black Counter Tenors, An Historic First”