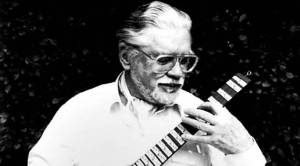 While I listen to a great deal of music I realize that I have a far less than comprehensive view of the percussion genre. And this is a composer about whom I knew nothing at all until I received this disc for review. Axel Borup-Jørgensen (1924-2012) was a highly respected and decorated Danish composer. This makes him a contemporary of two Danish composers whose work I do know, Per Nørgård (1932- ) and Ib Nørholm (1931- )

A bit of research reveals that there is a soundcloud page with a great selection of his works here. He is reportedly best known for his orchestral work Nordisk Pastorale Op. 51 (1965).

He is described as a modernist but not in the redefining the nature of music modernism of Cage and his peers nor is it simply academic modernism heaping unending honors to and variations on Schoenberg’s methods. This composer’s modernism is creative but not particularly difficult listening. 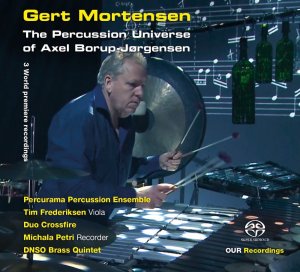 The Percussion Universe of Axel Borup-Jorgensen
(OUR recordings 6.220608)

But now we come to the disc at hand, a selection of his work for various groupings of percussion, sometimes with additional solo instruments such as viola, recorder and, in one track, a brass quintet. This is an excellent recording which, one customer review noted, would be a good audiophile test disc. The performances are dedicated and virtuosic. Violist Tim Frederiksen and recorder virtuoso Michaela Petri lend their substantial talents to this recording as does the Brass Quintet of the Danish National Radio Symphony Orchestra.

Now to the music itself. I must confess that this music, unfolding slowly, using a wide range of percussion instruments was not easy to grasp but requires a bit of concentration. I think this disc will be more interesting as I learn some of this man’s other compositions and place them in context.   I think this recording will be of great interest to percussionists as well as devotees of this composer.  And three of the five works featured  on this recording are world premieres.

All this is held together by veteran percussionist and conductor Gert Mortensen.  The album was recorded at the Concert Hall of the Royal Danish Academy of Music.  It was produced, mixed and mastered by Preben Iwan with thankfully informative liner notes by Jens Brincker and Henrik Friis were translated by John Irons.

The Danes have a rich musical history which this disc celebrates and the documentation of this lesser known composer’s work is a welcome addition to the catalog. 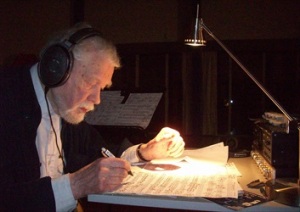 Axel Borup-Jørgensen at his work desk.