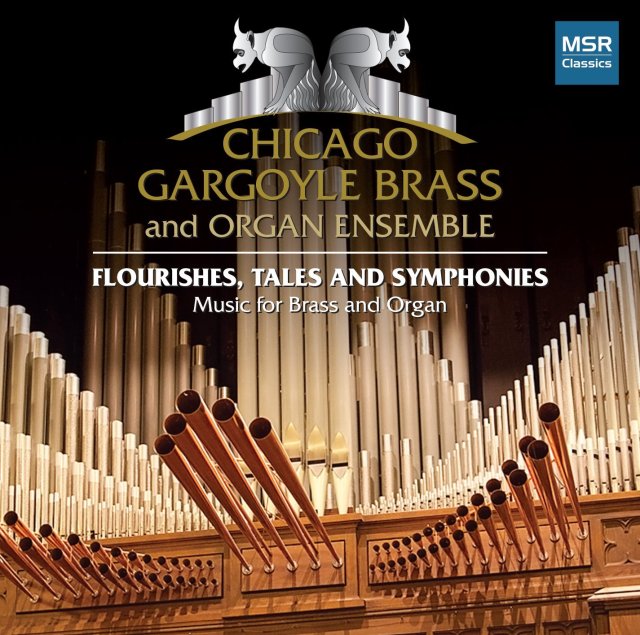 At first this disc seemed to be one of those “audiophile spectacular” niche market items designed to show off one’s stereo system.  I expected a well-recorded album with wide dynamic range and a clarity that would stun the listener but these types of albums frequently have well-recorded but uninteresting music or, worse, cloying showpieces that don’t bear repeated listening.

The first listen dissuaded me from that notion immediately because this is interesting and well-played music.  Except for three clever transcriptions of late 19th/early 20 century pieces all the music is from 2005-2013 (as are the transcriptions for that matter).

The music is, on the whole of a somewhat conservative nature but that is not a negative thing.  All of the music is pleasantly engaging and/or downright exciting.

The first four (of a total of 15) tracks present the music of Carlisle Sharpe (1965- ).  The first work Flourishes (2005/10) is a festive fanfare which was revised for this ensemble. The next three tracks contain the Prelude, Elegy and Scherzo (2012) is a commission by the present artists.

Next we move on to one of the arrangements by Craig Garner (1959- ).  This is, I think, a difficult arrangement to play but is handled with such ease by these players that one could be fooled into thinking it was easy.  The arrangement of the popular drinking song from Verdi’s La Traviata (1853) is a lucid and detailed transcription.  It is the clarify of the recording that makes this obvious as we are able to hear the various challenging lines that allow pretty much everyone in the ensemble to demonstrate their facility.

William Whyte (1983- ) is the next featured composer with a satisfying little suite called Dwarf Planets (2012).  It is in five brief movements.  The piece was also commissioned by and dedicated to Chicago Gargoyle Brass and artistic director Rodney Holmes.

Earthscape (2011) by David Marlatt is cast in a similar vein and, with the previous five tracks these are effectively musical appendices to Holst.  Marlatt, a Canadian composer has written this lyrical piece for the Gargoyle Brass.

Tracks 12 and 13 are another great transcription of a type of work which conductor Sir Thomas Beecham was fond of calling “bon-bons”, an appellation that was a proto-pop concert concept describing short, popular encore pieces.  It is the Polka and Fugue from “Schwanda the Bagpiper” by Jaromir Weinberger (1896-1967), a Czech composer whose reputation lies pretty much entirely on this work.   Originally for orchestra, this engaging work is very effectively arranged for this ensemble.

Tracks 14 and 15 comprise another transcription, this time of two movements from Camille Saint-Saens’ (1835-1921) 3rd Symphony (1886).  This is another truly great piece of music that always plays well with audiences.  The original is for a large orchestra and an organ.  The transcription is remarkably faithful to the score and it’s hard not to get hooked on that finale.  The entire symphony is actually based on the “Dies Irae” chant from the Requiem Mass though this is not a somber piece at all.

The last track is Velvet Blue (2012) by Peter Meechan (1983- ), a British born Canadian composer.  Originally written for a “rock” organ (the Hammond variety) and here played on a traditional pipe organ this is one of the most unusual pieces here.  It’s blues/jazz inflections harken back to big band sounds of the 1930s.

Brass instruments and organs are not instruments known for their agility.  Combine that with the resonant recording space of the churches involved and you have some serious engineering challenges.  Hudson Fair at Hudsonic has met these challenges and succeeded in capturing these performances in lucid detail with a true audiophile recording.  The dynamic range is wide and the the recording is about as clear as I have ever heard done  in this setting.