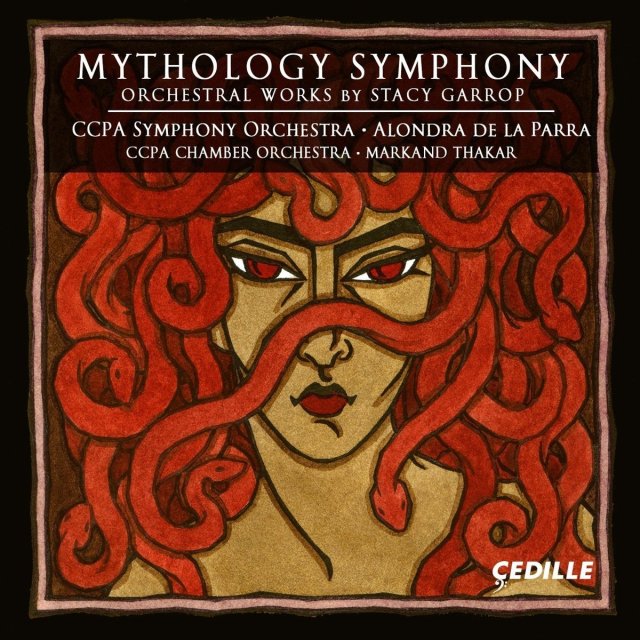 Cedille has tended to be very supportive of local artists (they are based in Chicago) and this is a fine example of them hitting a bulls eye.  Stacy Garrop boasts about 20 CDs which include her music and she has, as of 2016, began her career as a freelance composer.  She had taught composition at Chicago’s Roosevelt University from 2000-2016.

Her name is a new one to this reviewer but one which will remain on my radar.  This stunning disc contains three major works by her, the five movement Mythology Symphony (2007-2014), the three movement Thunderwalker (1999) which was her doctoral dissertation and Shadow (2001).

A quick look at Garrop’s intelligently designed website shows her to be a very prolific composer with works for almost every imaginable ensemble.  Scores and recordings can be ordered from the site.  Garrop earned degrees in music composition at the University of Michigan-Ann Arbor (B.M.), University of Chicago (M.A.), and Indiana University-Bloomington (D.M.).

The composer at the piano (from the composer’s website)

Another of the nice features of this disc is the opportunity to hear the fine musicianship of the Chicago College of Performing Arts Symphony (and their chamber symphony) of Roosevelt University.  Conductors Alondra De La Parra and Markand Thakar are also new to this reviewer but I am glad to be able to acquaint myself with their skills in this recording. Listeners would do well to note these fine artists and to thank Cedille for supporting them. This is a fine example of producer James Ginsburg’s ability to recognize and promote local talent.

The centerpiece here is, of course, the Mythology Symphony.  Its five movements were composed over several years and the symphony was first performed in its entirety in 2015. One is immediately struck by the directness of the composer’s invention and the elaborate but lucid orchestration.  This work would likely please any concert audience and its color and sense of narrative suggest almost cinematic aspirations.  Indeed Ms. Garrop could undoubtedly write for the screen with her wide ranging palette.

The second work, Thunderwalker, as mentioned above, is Garrop’s doctoral dissertation and the listener will doubtless perceive the fact that her style and skillful handling of the orchestra appear to already have been fully formed in this, her earliest orchestral composition.  The work, which does not have a specific program as does the symphony, still demonstrates the composer’s fascination with the mythological dimension as she weaves classical forms of fugue, pasacaglia and scherzo to describe her imagined image of the Thunderwalker.

Shadow (2001) is described in the notes as a reflection of the composer’s experience at the Yaddo artist colony.  Again her fascination with images to drive the music are present and her style remains remarkably consistent with the other two works on the disc.

The recording was engineered by Bill Maylone at the Benito Juarez Community Academy Performing Arts Center in Chicago.  Graphic design is by Nancy Bieschke with the lovely Medusa cover art by Thalia Took.  The very informative liner notes are by the composer.

2 comments on “Stacy Garrop, A New Master of the Orchestra”