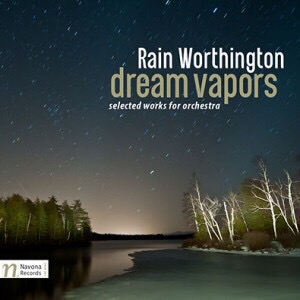 Rain Worthington herself kindly sent this CD to me for review.  There seems to be very little biographical information online about this very interesting composer.  Her current  credentials available on her website are impressive but there is little to be found on her training and influences. (Time to talk to the webmaster I suppose)  This appears to be the first disc dedicated solely to her music and it is an great one.

There are seven tracks representing seven orchestral pieces dating from 2001 to 2012. Like the album title, all are given poetic titles which make no reference to musical structure.  No doubt there are stories behind each of these but there is no information  in the liner notes as to the inspirations or intended meanings of this music.

This reviewer is fond of detailed liner notes but their absence is hardly a hindrance to the appreciation of these little tone poems for various sized orchestras.  There is a remarkable consistency of style here suggesting that this composer has a clearly established voice.  Clearly Worthington is a master of orchestration as she wields complex orchestral pallets where dissonance as well as orchestration contribute to the color in a basically tonal framework.

The music here is about motive and gesture rather than melody per se.  Perhaps that is a “minimalist” method but the impression to this listener suggests influences as diverse as Claude Debussy, Jacob Druckman, Daniel Asia, Toru Takemitsu, and Anton Bruckner. This is beautiful though not “pretty” music with complex emotional content that leans in somber, wistful, sometimes haunting, and even nostalgic directions much as an impressionist painting.

The lovely cover photograph, a time exposure of a night scene with a blurring of stars over a lake, works as a metaphor for the album’s content.

Three orchestras (none of them American) under three different conductors are employed in this very satisfying release.  Multiple listenings will definitely contribute new layers of understanding for the listener.  This listener found that initial impressions of seemingly simple, pretty romantic/impressionistic leanings give way to things deeper and perhaps even disturbing.

One of the conductors, Robert Ian Winstin (1959-2010) was an American composer and conductor (whose compositional efforts deserve some serious review) is at the helm of the Czech Philharmonic Orchestra on two tracks.  Petr Vronsky leads the Moravian Philharmonic Orchestra on four tracks and Ovidiu Marinescu leads the Russian Philharmonic on one track.  It is amazing how well these orchestras handle the challenges here.  These are some excellent musicians.

Kudos to producer Bob Lord for his bold choice in releasing this disc.  Hopefully we will soon be seeing more of this composer’s work in the near future.  My thanks to Ms. Worthington for sending this my way.