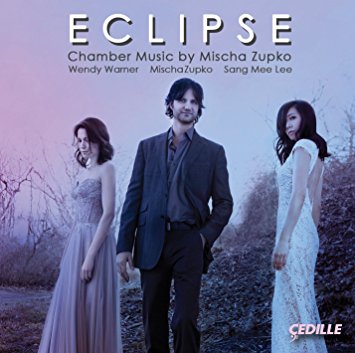 Mischa Zupko (1971- ) is a composer, a pianist, and a professor of music at Chicago’s De Paul University.  He is the son of avant garde composer Ramon Zupko (1932- ).  Mischa’s work featured on this Cedille release suggests that the proverbial apple has fallen quite a distance from the family musical tree.  That is neither bad nor good but it is striking.

The elder Zupko’s work, despite its significance, is too little known.  A few recordings exist on the old CRI recordings label and this writer recalls being impressed by them. According to the Chicago Reader article he really didn’t want his son to go into the music business but apparently what is in the blood is in the blood.  A curious note too is that one can find articles on both these composers on Wikipedia but not the English/American one, rather curiously both are to be found on the Dutch Wikipedia site.

The present disc is apparently the first dedicated entirely to this emerging composer’s work (now numbering some 50 pieces).  It is a disc of chamber music and from the first the listener is immediately aware that the younger Zupko is possessed of a sort of retro romantic bent.  Think of the great virtuoso composer/pianists of the 19th century like Franz Liszt and Anton Rubinstein.  He does gratefully acknowledge his father as inspiration but clearly follows a different path.

This music is about passion and virtuosity.  The composer defines this clearly in his liner notes.  The performers Mischa Zupko on piano, Wendy Warner on cello, and Sang Mee Lee on violin demonstrate both passion and virtuosity on this lucid recording.  They play very well together and they all have ample opportunities to show off their respective skills.

There then follows the four movement”Shades of Grey” (2005) for violin and piano.  This is the earliest work on the disc but stylistically it is consistent with the rest of the disc. Zupko certainly develops as a composer but his style seems pretty firmly established.

The last track seems to be the big feature here.  “Love Obsession” (cello, piano, 6 pre-recorded cello tracks; 2013) is perhaps the most adventurous and grand of the works on this recording.  As with the other works on the disc the composer cites various literary influences and inspirations consistent with the apparently romantic ethic which seems to drive his creativity.  And as with the other tracks we hear a tonal romantic idiom filled with passion.

My title for this review is not intended to suggest that the younger Zupko has surpassed his father in any way except perhaps in that his work has, whether by accident, timing, design, or whatever, gotten more attention.  This is not a case of Johann Strauss Jr. and Sr. in jealous competition, this is simply another generation responding to it’s muse and that is worth celebrating.