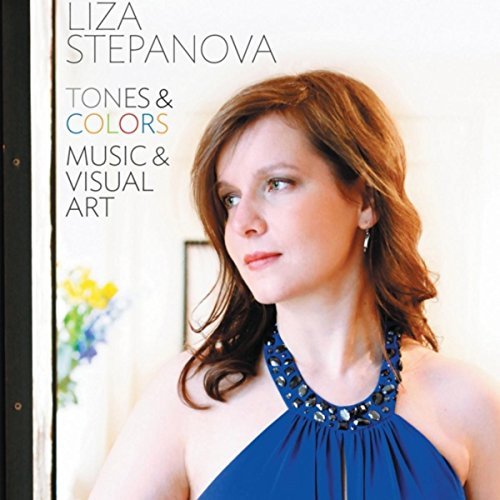 This is the solo piano debut of this talented and incredibly virtuosic artist.  This hard working pianist can be heard on a previous CD (After a Dream) with the Lysander Piano Trio.  Her web site can provide a good idea of the range of solo, chamber, and orchestral music in her repertory.

This CD is a good example of creating a brand, a practice which seems to be the current rage especially among artists who specialize in new music.  I have previously commented on the brands of pianists like Sarah Cahill, Kathleen Supové, Nicolas Horvath, and Stephane Ginsburgh to name a few.  All are amazing musicians but each seems to have been able to carve out an identifiable niche which sets them apart from each other and defines their various artistic missions.  Granted these are soft definitions in that they do not preclude them from playing anything they choose but it gives audiences a sort of general idea of what to expect when they do a program.

Liza Stepanova appears to have chose virtuosity as her signature.  She plays what sounds like fingerbreakingly difficult music with both ease and expressiveness.  Here she chooses to basically survey virtuosity from J. S. Bach to György  Ligeti.  In addition she has chosen to pair each composition with an analogous piece of visual art.

The pairing of music and visual art is as old as dirt and has always seemed to have an inherent validity.  Tone poems like Mussorgsky’s Pictures at an Exhibition or Debussy’s Clair de Lune are familiar examples of music as a visual analog.  But music sometimes suggests pictures even if it was not the stated intent of the composer too.  Stepanova covers the visual territory from the representative to the abstract in this entertaining collection.

There are 13 tracks grouped into 4 visual art themes (A Spanish Room, Nature and Impressionism, Conversations Across Time, and Wagner, Infinity, and an Encore).  The only problem I have here is the photos of the art (which thankfully are included in the little booklet) are necessarily small and really don’t give the consumer the full intended effect.  One would do well to obtain some art books or some larger prints of these to gain the intended effect.

I won’t go into detail about each individual piece.  Suffice it to say that they are all technically challenging and intelligently chosen pieces.  This is a very entertaining program from this emerging artist.

This reviewer is given to speculation as to Stepanova’s next release.  Perhaps Sorabji with some Dada works?  Whatever it is will doubtless be as interesting and entertaining as this disc.  Brava, Ms. Stepanova!