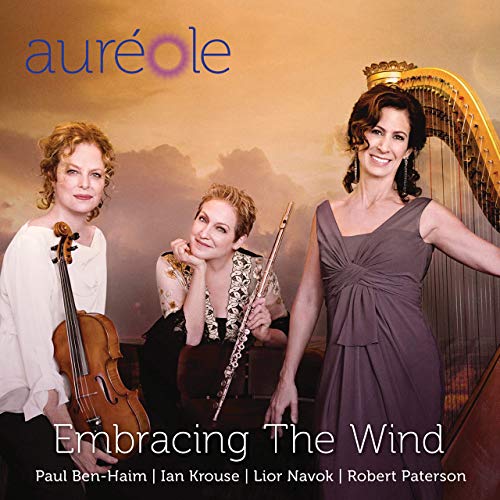 Auréole consists of Laura Gilbert, flute; Mary Hammann, viola; and Stacy Shames, harp.  It is an ensemble seemingly based on the instrumentation of Debussy’s justly famed sonata (1916) for that combination of instruments.  It is like the instrumentation of Schoenberg’s Pierrot Lunaire (1912) whose instrumentation (flute, clarinet, violin, piano, and voice and/or percussion) has become a sort of standard grouping and has had much written for it (much more than the flute, viola, and harp combo).

Nevertheless this ia a charming chamber ensemble and they’ve chosen their repertoire well for this recording.  Here are four works which share the instrumentation of the aforementioned Debussy sonata.  They also share a similar musical aesthetic in their basically tonal and romantic style. This ensemble has chosen works dating from therapy twentieth century to the early twenty first. Two are by Israeli composers and two by Americans.

The album opens with a trio simply entitled, “Chamber Music” (1978) by the late Paul Ben-Haim (1897-1984).  He was born Paul Frankenberger and was born in Germany. He, like many Jewish refugees from the horrors of WWII, settled in what was then Palestine where he became known (for better or worse) as the Israeli Aaron Copland.  His music is overdue for a new reckoning and this is a fine example of his work. This lovely trio is cast in three movements and is bound to please and entertain.

Next up is Robert Paterson’s (1970- ) “Embracing the Wind” (1999).  Cast in one movement it has a touch of modernism but remains a predominantly post-romantic work which takes its inspiration from the wind and the way it moves objects. It traverses several moods as it spins its tale but remains compelling throughout, a very strong piece of music which fits the general sound and ethic of this program.  And it leaves this listener wanting more.

“Veiled Echoes”(2000) is the second work by an Israeli composer on this disc.  Lior Novak (1971- ) would seem to be a worthy successor to Mr. Ben-Haim.  This three movement trio is a meditation on the composer’s perception of links between mountains, sky, and other nature phenomena. Very enjoyable music.

The album concludes with what is described as a tone poem.  It is based on one of Frederico Garcia Lorca’s (1898-1936) stories, “Thamar y Amnon”. The composer is Ian Krouse (1956- ).  This rather harrowing romance is in a single movement with many moods which evoke the tale.  In a nice touch the story is reproduced in its entirety in both Spanish and English.

This is a beautifully conceptualized and performed disc which introduces music which would compliment the Debussy sonata in spirit as well as instrumentation.  Brava and now tell us of your next project.

One comment on “Auréole: Embracing the Wind and the Strings”