The late, great British science fiction writer Arthur C. Clarke once asserted that “any sufficiently advanced technology is indistinguishable from magic (to those who don’t know the technology)”. A similar assertion can be said to be true of music. New music is a large and diverse repertoire that is difficult to navigate without some sort of guide to put those new sounds in context. And Charles Amirkhanian has, via his years as music director of KPFA and his stewardship as Executive and Artistic Director of Other Minds (among the many hats he wears) has provided such guidance for interested listeners to new music since at least 1969.

In an unanticipated gesture of magnanimity there was, at the will call table, not the usual “items for sale”, rather there was a lovely free tote bag and a large selection of OM CDs there for the taking. Suffice it to say, I and many others went home heavier than we had arrived.

He and his hard working team (Blaine Todd, Associate Director; Mark Abramson, Creative Director; Liam Herb, Production Director; Adrienne Cardwell, Archivist; Andrew Weathers, Recordings Director; Jenny Maxwell, Business Manager; and Joseph Bohigian, Program Associate) have provided guides for adventurous listeners that have included interviews with musicians and composers, a record label dedicated to new music, and live lectures and performances of creative new music from all over the world. The annual Other Minds Festival (the 26th was presented earlier this year) has brought in a cornucopia of stellar performers with a knack for finding stars at the outset of their careers. Other Minds at 30 is truly one of the great joys of San Francisco and it’s environs.

This evening was one of the lecture recital variety. Kyle Gann, composer, writer, critic, musicologist, OM alum, and vice president of the Charles Ives Society was brought in to provide the lecture portion of the evening. In addition, this event was held at a major temple of new music in the Bay Area, Mills College (actually Amirkhanian’s alma mater). The beautiful Littlefield Concert Hall itself displays the striking work of California architect, Julia Morgan. Artistic spirits past and present were undoubtedly here this night in the history of this place as well as those artistic spirits present in the audience.

The program began with a brief discussion among Mr. Amirkhanian, Professor Gann, and maestro Hamelin. Then Gann took his place at the lectern and Hamelin took a seat at the piano where he had graciously agreed to perform musical excerpts to illustrate Gann’s lecture. Actually Gann has written a definitive and very readable book on the work destined for performance on this night. “Essays After a Sonata” (2017), the title a gentle pun in homage to composer Charles Ives who (in an unprecedented move) wrote a little book titled “Essays Before a Sonata” as a means of introducing his landmark Second Piano Sonata.

In addition to his wonderful book, Gann has had a long interest in the literature of the so called “Transcendentalists” who are the subject (or at least subtext) of this music. He even went as far as to suggest specific literary references implied in the music. The Second Sonata “Concord, Mass., 1840-60, (written 1904 to 1915 with several subsequent revisions) is in four movements titled, “Emerson”, “Hawthorne”, “The Alcotts”, and “Thoreau”. Gann provided a few concise illustrations in a rather brief talk that provided just enough context to assuage the uninitiated (if there were any in the audience, lol). Hamelin coordinated most amicably and then there was a short intermission.

Marc-Andre Hamelin (http://www.marcandrehamelin.com) was born in Montreal and is now based in Boston. His discography consists of over 80 albums. My own introduction to his artistry was his first release in 1988 of William Bolcom’s Pulitzer Prize winning, Twelve New Etudes (1977-1986) and Stefan Wolpe’s “Battle Piece” (1943-47). His web site is worth your time and gives an idea of the sheer scope and acumen of his repertory choices. In fact his most recent releases include more from William Bolcom and a disc of his own compositions. In fact he gives fine performances of music from Mozart and Haydn to the present. Hamelin has performed the Concord Sonata numerous times and has recorded it twice. He performed this gargantuan work entirely from memory.

Hamelin gave an extremely focused and convincing performance, an exercise of both intellectual and physical stamina. The audience, due to their reverence for Ives, Hamelin, and the spirits present in the hall, sat in rapt attention with nary a squirm nor a cough (well, maybe one cough) to interrupt the flow of this landmark work of American modernism. Such was Hamelin’s thrall. The piece goes through a wide dynamic range and the soft pianissimo resonances could be heard as clearly as the Beethoven-esque heroic fortes. Hamelin took two curtain calls to a standing ovation of a very appreciative audience. Gann quipped at one point that he uses Hamelin’s Hyperion recording of the Sonata in his classes. It was easy to see why.

I admit to some trepidation as I proceeded to the beautiful War Memorial Opera House in downtown San Francisco.  While I had heard of this composer, Ivan Wyschnegradsky (1893-1979), it was only through one work which was contained on a disc with other microtonal works by John Cage and Harry Partch performed variously by Joshua Pierce, Dorothy Jonas, and Johnny Reinhard (among others).  And microtonal music can be tedious in some hands.

Adding to the sense of obscurity, the concert was in a small chamber music hall on the fourth floor.  Other events ran concurrently on this night.  The hall was nearly filled to its capacity of just under 300 people most of whom I would guess have never heard of this composer.  But they likely had heard of the Arditti Quartet and clearly put their trust in the amazing ear and mind of executive and artistic director Charles Amirkhanian to deliver a satisfying musical experience which he does most reliably.  This concert was no exception.

The stage awaits the performers with that OM logo projected on the floor.

The Arditti Quartet was formed in 1974 and quickly became known as one of the finest interpreters of contemporary string quartet music.  Their repertoire is vast and they do not shy away from technical difficulty or other artistic challenges.  In fact they had recorded the Wyschnegradsky Quartets but, sadly, that recording is out of print.  Even more interesting is the fact that tonight’s performance constitutes U.S. premieres for all the works on this concert except for the Haas Quartet (included at the suggestion of Mr. Arditti to fill out the program).  Another astonishing fact shared by Amirkhanian is that this is the only time that the quartet has been asked to play this music in concert.  There are plans to release those recordings in the near future pending negotiations with record companies. 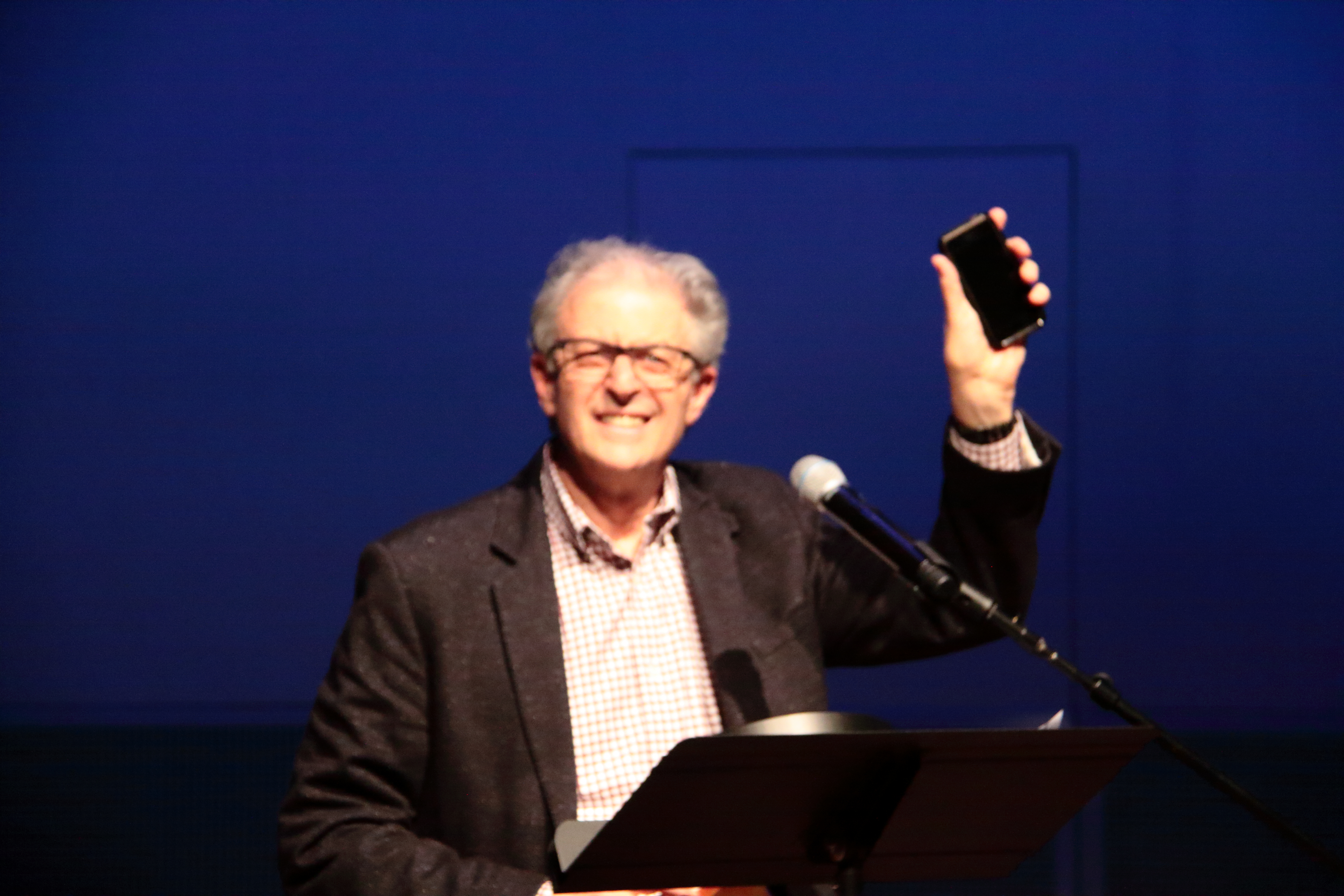 Amirkhanian reminded the audience to silence those pesky cell phones.

Mention needs to be made of the talents of OM’s graphic designer (and stage manager among other duties), Mark Abramson.  His work on this and last year’s program booklets take things to a new level of excellence.  The program notes by Charles Amirkhanian, Randall Wong, and Blaine Todd are both lucid and comprehensive (a very necessary thing in dealing with new and obscure music).  And the photos of the composer and the performers along with some of the composer’s own art work make this another true collector’s item.  Previous programs were certainly well done but this is a step up.

I chose to just listen and to read the notes later rather than get caught up in details.  Indeed that was a good choice.  Wyschnegradsky’s approach to the use of microtones seems more focused on the possibilities of extending melodic language than the harmonic and my understanding of complex harmony is admittedly limited anyway.  Of course the harmony is necessarily different than the western models of the 18th and 19th centuries but the music, at least in the hands of such talented interpreter’s such as the Arditti speaks rather directly to the listener.

The music was presented chronologically in order of the years these pieces were composed (String Quartet No.1, 1923-4, rev. 1953-4), (String Quartet No. 2, 1930-1), (String Quartet No. 3, 1945, rev. 1958-9), and (Composition for string quartet, 1960, rev. 1966-70) completed the first half of the program.  There was surprisingly little in the way of dissonance and the quartet played with a palpable intensity and concentration creating very convincing performances.

The second half began with Wyschnegradsky’s last composition, a String Trio (1978-9).  Incomplete at the time of his death the trio was revised completed by Claude Ballif.  Again what one hears is not what you might expect from microtonality.  The composer has realized a uniquely effective way to use microtones.  Hearing this survey makes the composer’s vision clear and places him in the company of such as Alois Hába (1893-1973), Harry Partch (1901-1974), and Ben Johnston (1926- ) to name a few.

The revelation for this listener was hearing a good sampling of the composer’s vision and a creative way to use microtones unlike any other composer really.  And it became clear too why Charles chose to revive this unique voice in the musical world.  This is beautiful music.

As mentioned earlier Mr. Arditti had remarked that the Wyschnegradsky Quartet and Trio music would not quite fill an evening and he suggested they play the Second String Quartet (of about 6 now I believe) by Austrian born composer Georg Friedrich Haas (1953- ).  It was the only work which was not a U.S. premiere.

Arditti’s ear for programming was finely as tuned as ever and this quartet provided a very satisfying finale to the evening filled with wonderful discoveries.  While this particular quartet uses some microtones the style is denser and more dissonant overall than the preceding music.  This is not to say that it was not entertaining, rather it is illustrative of the rich possibilities of microtonal composition.  The Arditti again shows itself to be at the forefront of the finest interpreters of the modern string quartet and clearly Haas is a name worth knowing as well.  Bravo!

The musicians acknowledge the standing ovation and warm applause

Save the dates June 15 and 16 for the last two concerts in this year’s Other Minds 24 program.