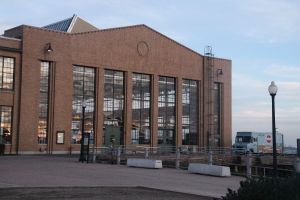 On Sunday November 17th I attended one of the most unusual concerts in my experience.  The performance of Rhys Chatham‘s ‘A Secret Rose’ at the beautiful Craneway Pavilion in Richmond was produced by Other Minds and the eclectic bay area new music bloodhound Charles Amirkhanian.

Rhys Chatham is an American musician and composer who has spent much of his career in living in France.  He was a part of the New York post-punk downtown music scene in the 70s working with musicians like Glenn Branca, La Monte Young and Charlemagne Palestine. 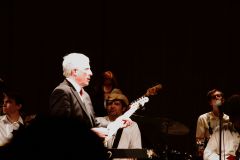 Sunday’s concert was the west coast première of this piece which is scored for 100 electric guitars, bass guitar and drum kit.  It is sufficiently complex as to require at least 3 conductors in addition to the principal conductor (Chatham).  In this respect it brings to mind the work of Charles Ives and Henry Brant.  But this music resembles neither of these composers, at least not precisely so.  Beginning with his work with drones and harmonics Chatham has developed compositional techniques and honed them to a point of mastery.  The multi-movement work was microtonal, polymetric, aleatory/improvisatory, dissonant, melodic and enthralling.  Did I mention that it was loud?  No?  Well loudness may be the most obvious aspect of this music but that loudness is organic to the music.  The volume paired with the very live acoustics of the cavernous performance space elicited a wide range of harmonics which, through Chatham’s skillful techniques evoked a variety of timbres.  (Complementary ear plugs were provided.  I took a pair but did not use them.)  I heard guitars, certainly and drums and bass.  But at times it sounded like there were brass instruments and even vocals.  (I swear I heard words being sung.)

Craneway Pavilion is a 45,000 square foot former Ford assembly plant that was remodeled for use as a performance space and conference center.  Its size and waterfront location remind me of Chicago’s ‘Navy Pier’ on  the lakefront.  Craneway is on San Franciso Bay and faces south with a view of the bay bridge eastern span as well as views of San Francisco.  The appearance is that of a large loft space with metal beams and a general industrial appearance.  Its floor, walls and ceiling are surfaces that are highly reflective of sound and therefore ideal for this performance.  As promised in the promotional materials the full moon rose in the east over the bay before the performance began. 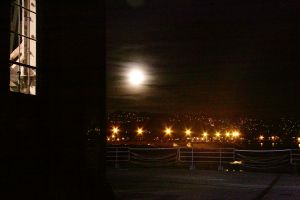 Full Moon rising over the bay just before the performance. 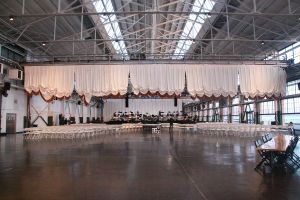 Looking toward the seating and the stage in the performance space at Craneway Pavilion.

Chatham’s music was not about complexity for the sake of complexity.  His compositional strategies required the complex goings on we heard on Sunday.  The room itself became a sounding chamber itself amplifying, canceling and propagating the swirling harmonics that resulted from specialized tunings in addition to the other techniques mentioned.

The multiple movements ranged from drone-like structures to more rhythmically complex sections and even melody.  Yes, melody. Chatham writes catchy melodies and motives that sound like they’ve been taken from one rock album or another.  Sonic gestures evoked impressions of Ozzie Osbourne, Eric Clapton, and many others depending on your personal listening experiences.  This music was ritual as much as expository.  His techniques were not limited to rock music but extended to free jazz and classical techniques as well.  Taken as a whole the piece was a multi-movement symphony, each movement sustaining its own argument in service of the whole.  For the finale Chatham set aside his conductor’s baton and picked up his guitar, not for a solo as one might expect in an ordinary concert, but to participate in the ecstasy of performance. 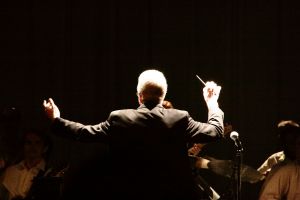 It is tempting, if a bit cliché, to suggest that this ritual music stirred the ghosts of the past.  While standing in the ticket line one gentleman said to me, “I walked out of a Jimi Hendrix concert in 1967 because it was too loud”.  Almost immediately someone else said, “I was at that concert…”.  Perhaps the Grateful Dead, Jefferson Airplane and Pretty Things were stirred from their slumbers.  They were certainly evoked.  I don’t know if the aforementioned gentleman ultimately stayed for the performance but I suspect he probably did, maybe in honor of Jimi. 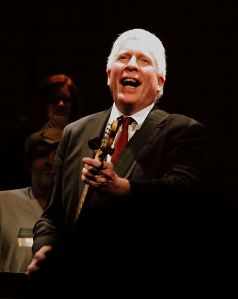 Chatham playing guitar in the finale of ‘A Secret Rose’

The crowd was several hundred strong ranging in age from about 5 to 85.  Most appeared to be enjoying this loud and driving rhythmic composition.  Some rocked or nodded to the beat.  Some sat entranced and/or perplexed but attentive.  At the end there was a standing ovation and, from Mr. Chatham, a welcome encore featuring seriously de-tuned guitars.

The encore piece was also captivating and inventive though certainly not as long.   Chatham’s music is not easy to categorize or describe.  Even having heard a fair amount of his music on recordings over the years I could not have anticipated what I heard at this concert.  I now understand how some music cannot be adequately represented even by our best recording technology.

I’m not sure of the significance of the title but it does bring to mind William Butler Yeats’ book, ‘The Secret Rose’.  Its stories steeped in Irish mythology are introduced by an opening poem which reads in part:

Far of, most secret, and inviolate

Enfold me in my hour of hours; where

Who sought thee at the Holy Sepulchre,

Or in the wine-vat, dwell beyond the stir

And tumult of defeated dreams; and deep

Among pale eyelids heavy with the sleep 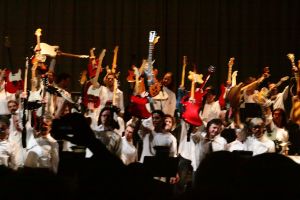 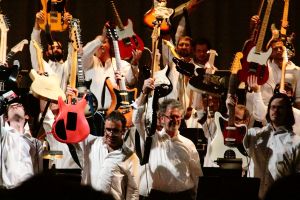 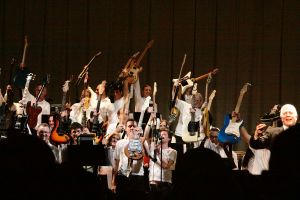