Starkland is one of those labels whose releases seem to be so carefully chosen that one is pretty much guaranteed a great listening experience even if that experience might challenge the ears sometimes.  If one were to purchase their complete catalog (as I pretty much have over the years) one would have a really impressive and wide-ranging selection of new music.

I recently reviewed a very fine ICE (International Contemporary Ensemble) recording of music by Anna Thorvaldsdottir here. The present disc is the first appearance on Starkland of this ensemble whose performance skills and repertoire choices show the same depth of understanding as the producers of the label upon which they now appear.

ICE was founded in Chicago in 2001 by executive director and flautist extraordinaire Claire Chase.  The discography on their website now numbers 21 albums including the present release.  The group features some 30+ artists and musicians including a live sound engineer (like the Philip Glass Ensemble) and a lighting designer.  Do yourself a favor and check out the ICE Vimeo page to get some ideas about why having a lighting designer is a good idea.  Their performances are visually as well as musically compelling.  And who knows, perhaps there is a Starkland DVD release in their future.

About half their albums feature music by members of ICE and that is the case with this release.  One always has to wonder at the process that is involved in choosing repertoire to perform and/or record but there is no doubt that this group seems to have good instincts in regards to such decisions as evidenced by the already wild popularity of this disc on WQXR and the positive initial reviews so far. 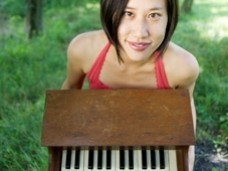 Phyllis Chen‘s biographical data is a bit sparse on both the ICE website and her own so I am going to assume that this talented young keyboard player likely began playing at an early age.  Like fellow pioneers Margaret Leng Tan and Jeanne Kirstein before her she has embraced toy pianos and, by extension I suppose, music boxes, and electronics into her performing arsenal.  In addition to being a composer she is one of the regular members of ICE. 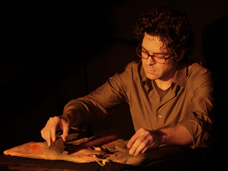 Nathan Davis is a regular percussionist with ICE as well as a composer.  His works range from opera to chamber and solo pieces for various instruments as well as electronics.

The tracks on this release pretty much alternate between these two featured composers.

The first track is Ghostlight (2013) by Nathan Davis, a sort of ragged moto perpetuo for “gently”prepared piano.  This is a good example of how these musicians (pianist Jacob Greenberg in this instance) have really fully integrated what were once exotic extended techniques into a comprehensive catalog of timbral options which are used to expand the palette of creative expression.  This is not a second rate John Cage clone but rather another generation’s incorporation of timbral exploration into their integral canon of sonic options.  This is an exciting and well-written tour de force deftly executed.

The next two tracks take us into the different but complimentary sound world of Phyllis Chen.  Hush (2011) for two pianos, toy pianos, bowls (presumably of the Tibetan singing variety) and music boxes is a playful gamelan-like piece played by the composer along with pianist Cory Smythe.

Chimers (2011) is a similarly playful work requiring the assistance of clarinetist Joshua Rubin, violinist Erik Carlson and Eric Lamb (on tuning forks) along with Chen and Smythe once again.  Again we hear these unusual instruments and timbres not as outliers in the musical soundscape but rather simply as artistic elements that are part of the composer’s vision.

Track number 4 features a work for bassoon and live processing.  Davis’ On Speaking a Hundred Names (2010) is played by Rebekah Heller and again the (to this listener) usually uncomfortable fit of acoustic and electronic are achieved very smoothly.  Music like this gives me hope that some day I will be able to drop the inevitable negative connotations I have associated with the term “electroacoustic”.  This is very convincing music and not just in the “golly gee, see what they’re doing” sense either.  The experimentation here (including the multiphonics) appears to have preceded the composition giving us an integrated and satisfying listening experience.

Chen comes back on track 5 with another successful integration of acoustic and electronic in her, Beneath a Trace of Vapor (2011).  Eric Lamb handles the flute here playing with (or against) the composer’s prepared tape.  This electroacoustic trend continues in the following track (also by Chen) called Mobius (201-) in which Chen, Smythe and Lamb are credited with playing “music boxes and electronics”.  Once again the integration of electric and acoustic speaks of a high level of music making. 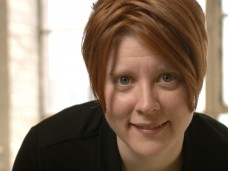 The work here is an exploration of language, sound and expression.  This most eclectic and ponderous of the selections is a wonderful opportunity to hear the considerable skills of resident vocalist Tony Arnold who sense of pitch and articulation are incredibly well-suited to this work.  Her performance leaves nothing to be desired and is likely as authoritative as it gets.  The work seems to require a great deal of concentration and coordination on the parts of all involved and ICE takes the opportunity to demonstrate their well-honed skills as they clearly listen to each other and go all out in terms of achieving the subtlety of expression required in this demanding and complex work.

As usual the Starkland recording is clear and detailed without the sense of claustrophobia that such detail can take on and the liner notes are useful without extraneous detail.  This is an ensemble to watch/listen for both for the performers and for the music they choose to program.  You won’t be disappointed.