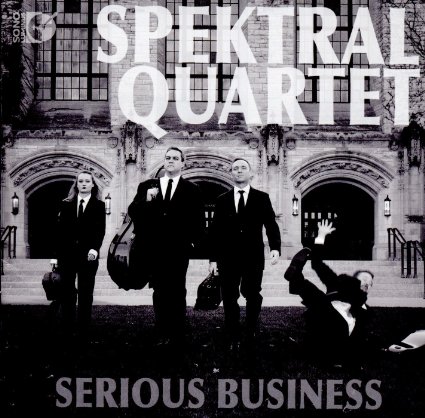 OK, bear with me here for just a moment.  The proliferation of string quartets (and by that I mean the grouping of musicians as a performing entity) has been positively dizzying over the last 30 years.  For those who grew up with the standard Julliard Quartet, Guarneri Quartet, etc. there were just a few outstanding names in this genre.  However since the advent of the new quartets like Kronos and then Turtle Island, Arditti,etc. the field has expanded rather prolifically. Couple this with a boom in string quartet writing notably Elliot Sharp, John Zorn, Wolfgang Rihm. Elliot Carter, Peter Maxwell-Davies, Ben Johnston among many others and I was filled with some trepidation upon receiving this disc for review.  I mean, how many things can you do with a string quartet?

Apparently there is a great deal more to be explored in this genre.  I am happy to say that these folks are up to the task as are the composers whose work they present.  Serious Business is some seriously interesting music performed with serious skill by this new quartet, the Spektral Quartet.  They are the string quartet in residence at the University of Chicago, itself a venerable place for new music.

We start here with a piece by Sky Macklay called Many Many Cadences (2014) a piece that seems to come from a similar place to that of the work of Conlon Nancarrow with intricate rhythms within a somewhat conservative tonal idiom.  The title is suggestive of Gertrude Stein (Many, Many Women).  It was commissioned for the Spektral Quartet by the Walden School.  The piece is immediately engaging and ultimately satisfying.

The second piece, The Ancestral Mousetrap (2014) by David Reminick features a less common use of a string quartet in that there is a vocal component. This is not the vocalist component pioneered by Schoenberg in his second quartet.  These vocalizations are performed by the quartet.  This is no simple feat either because the vocal writing is itself a challenge in its rhythmic complexity.  The piece resembles a little opera and indeed the text by poet Russell Edson is here called a libretto.  This piece was commissioned by the Spektral Quartet.

The third piece here is an unusual choice (and the only one not commissioned for the Spektral Quartet) which is explored in the liner notes .  Haydn’s Quartet Op. 33 No. 2, subtitled “The Joke” is one of the relatively few examples of attempts at program music (vs absolute music) to be found in the classical era.  First, no one will buy this disc just for the Haydn. Second, many collectors will already have this Haydn piece in their collection.  But with that said this is a lovely performance of one of the emblematic pieces of music that created the need for the performing ensemble known as the string quartet and it is a lovely performance as well.  I will leave it to other listeners to read the program notes and get into the rationale about its inclusion here.

The final piece, Hack (2015) by Chris Fisher-Lochead is perhaps the most unusual of the lot in that the composer uses vocal inflections by a collection of comedians (yes, comedians) as the source for his rhythmic and melodic contours and creates 22 separate pieces about 16 comedians (some get more than one piece).  This piece requires more concentration by the listener but, like any well-written piece, it reveals more of itself with repeated listenings.  The Barlow Endowment at Brigham Young University commissioned this piece for the Spektral Quartet.