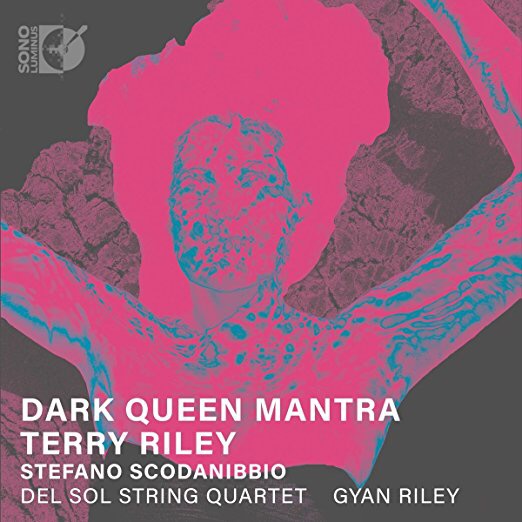 Terry Riley (1935- ) turned 80 on June 24, 2015 and happily we are still celebrating this treasure of American music.  His iconic work “In C” (1964) is one of the defining works of the minimalist movement and Riley’s trippy album, “Rainbow in Curved Air” (1969) has also endured well.  But these works typify his early style and his work has evolved though his primary influences continue to be jazz and Hindustani music for the most part to a very personal style.

His discography boasts at least 30 albums and his compositions range from various chamber music pieces, solo and duo piano music, orchestral music, concertos and even music drama.  His influence on musicians is wide ranging and even includes that familiar intro to Baba O’Riley by the The Who (the title is actually an homage to Meher Baba and Terry Riley and that intro derives from Riley’s first Keyboard Study).  In recent years he has achieved much deserved success in collaboration with his son Gyan Riley who is a composer in his own right and an extraordinary guitarist.  Their collaborations have been a true highlight in both musicians’ careers.

This disc is a production from the truly wonderful Sono Luminus label whose recordings continue to set a high bar for production and excellence in sound as well as in intelligent programming.

Three works are presented here.  The first is Dark Queen Mantra (2015) for electric guitar and string quartet.  It is obviously the centerpiece and it is a fine work commissioned in honor of Riley’s 80th and written for the forces who perform it here. The amazing and versatile Del Sol Quartet and Gyan Riley seem a natural pairing.  These California based musicians seem to pour the whole of their artistic hearts and souls into this performance and Gyan Riley, a fine musician in his own right, always seems to be at his very best in his collaborations with his dad.  (Indeed anyone who had the pleasure of seeing their live sets can testify as to their beautiful musical intimacy.)

So it is we have a definitive recording of yet another fine piece from this beloved composer.  The choice to follow it with Mas Lugares (2003) by the late Stefano Scodanibbio (1956-2012) is an inspired and very appropriate choice (Riley was fond of this composer and helped promote his work).  Scodanibbio collaborated with Riley and recorded two albums with him (Lazy Afternoon Among the Crocodiles, 1997 and Diamond Fiddle Language, 2005).  This work for string quartet is dedicated to Luciano Berio and is a sort of deconstruction via the lens of the composer’s vision of madrigals by the early baroque master Claudio Monteverdi.  It is truly a joy to hear more of this composer’s music and this serves as a loving homage by the Del Sol and, by association, with Riley.

The concluding music is again by Terry Riley and it comes from the rich period of his collaboration with another set of fine California based musicians, the Kronos Quartet. They Wheel and the Mythic Birds Waltz (1983) first appeared on a Gramavision disc and this is a welcome reprise.  It is via his writing for the Kronos that Riley produced most of his string quartet writing and it is a fine repository for his compositional talents.

For its sound and its compositional and performance content this is one of the finest discs to come across this reviewer’s desk and it is a beautiful homage to Riley (father and son), the Del Sol Quartet, the Kronos Quartet and to the late Stefano Scodanibbio.  This is a gorgeous and deeply satisfying album.  Kudos to all.