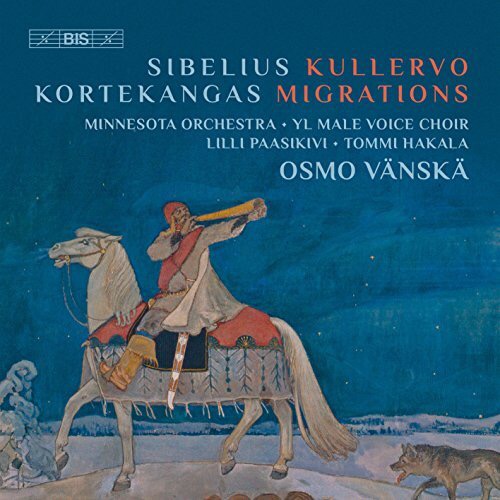 The choice of repertoire, performers, and the quality of their recordings make any BIS records release worthy of attention.  This two disc set is a fine example.  Three major choral/orchestral works which celebrate the justly proud Finnish culture are given very fine performances in this live recording from 2016.

The earliest work, Jean Sibelius’ Kullervo Op. 7 (1892) is one of the less recognized masterpieces by Finland’s best known composer.  Based on the Finnish national epic, The Kalevala, this massive symphony has acquired a bit of its own mythology.  Though several recordings of this work now exist the world world premiere recording by the late Paavo Berglund (1929-2012) from the early 1970s brought this neglected masterpiece to a larger listening audience.  The intelligent liner notes by Andrew Barnett (and Olli Kortekangas) document and dispel the myths that Sibelius suppressed all or portions of this work which was premiered in 1892 yet had to wait until after the composer’s death in 1957 to receive its first twentieth century performance.

In fact it seems more likely that the large forces required along with programmers’ preference for the composer’s later masterpieces were responsible for the unfortunate neglect of the present work.  It was the more romantically inclined myth of mysterious oppression that greeted Berglund’s triumphant premiere recording and this reviewer recalls being both charmed and intrigued by it.  Whatever the story the music is now a recognized early triumph by its creator and it is given a gorgeous reading by Finnish conductor Osmo Vänskä, (principal conductor of the Minnesota Orchestra which plays powerfully and definitively.
﻿

So why a second disc?  Well, Maestro Vänskä saw fit to commission a new work by contemporary Finnish composer Olli Kortekangas to serve as a companion piece to Kullervo and, then include a version with chorus of Sibelius’ best known work, Finlandia.  Together these three works would very satisfyingly fill an entire concert program.

Olli Kortekangas (1955- ) chose poetry by Finnish-American poet Sheila Packa and composed a 7 movement work (three are interludes for orchestra alone) in celebration of the 150th anniversary of modern Finnish migration to the United States.  The work, Migration (2014), is similar in orchestration with its use of male chorus and two soloists backed by a large orchestra.  The composer’s style is a sort of 21st century romantic style with tasteful modern touches.

The focus of this fine new work is an affirmation of Finnish culture and its impact on the United States.  It seems both fitting and satisfying then that this program conclude with the landmark work of Finnish pride and nationalism, Sibelius’ best known work, Finlandia (1899).  But rather than just another reading of this classic of the concert hall  Vänskä chooses to do a version with chorus.  This was not the composer’s original intent but this version fits remarkably well in the context of this album.

This is a very enjoyable album, well conceived and executed in every way.  Soloists Lilli Paasikivi and Tommi Hakala sing their roles with skill and passion as does the YL Male Voice Choir.  The applause track at the end of the Finlandia performance echoed the emotional experience of this reviewer and will likely do so for anyone who chooses to avail themselves of this fine example of recording art.