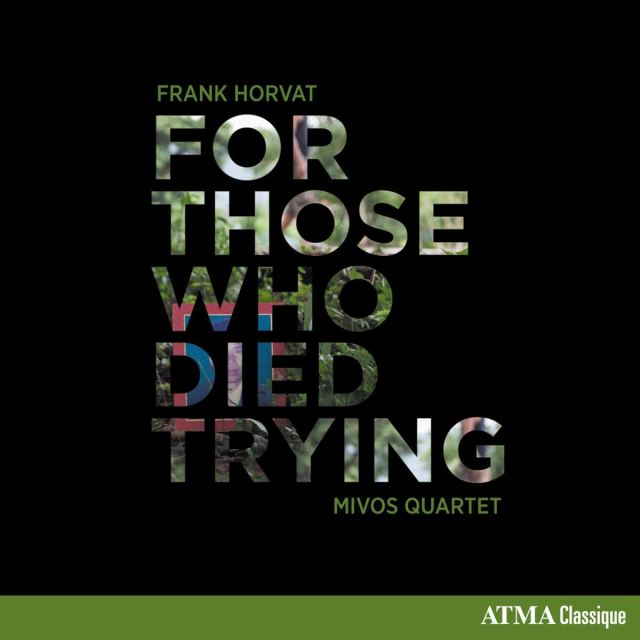 Frank Horvat (1974- )is a Canadian composer and musician with a profound interest in social justice and human rights.  In this 35 movement string quartet he is concerned with memorializing the lives of 35 activists who died while furthering the cause of human rights.  This work is made even more compelling by including photos from a photo essay of the subjects taken by Luke Duggleby, a Thai-based photographer and journalist.

Without a doubt this is a shining example of what I have termed, “Political Classical”, a genre of protest music which seems to have emerged in the twentieth century.  This work takes its place now with Frederic Rzewski’s Pueblo Unido Variations, and works by composers like Luigi Nono, Hans Werner Henze, and countless others who have chosen to use their expertise in the classical genre to write works analogous to the folk protest music which is perhaps better known to the listening public.

With songs one has the words which can directly or indirectly evoke the particular issue being addressed.  But, other than a dedication in the program notes, how does one imbue their music with the intended meaning for a given protest work.  Well, Mr. Horvat has chosen to utilize only the letters from these victims’ names to form the musical material for each portrait.  That is he uses the letters which correspond to musical notes.  Most famously this practice is known through the B, A, C, H (corresponding in German notation as B flat, A, C, B) theme which is the basis for Bach’s Art of Fugue.

By itself this can be a bland and meaningless exercise but Horvat manages to work within this carefully limited framework to create 35 very convincing portraits of these Human Rights Heroes.  The 35 movements are relatively brief and put this listener in the mind of composers who have  succeeded quite well with such a format such as Alan Hovhaness and Lou Harrison.  Both of these composers and the man in discussion here work in a basically tonal framework with a balanced and judicious use of dissonance.  What is curious is how he seems to succeed in evoking these people purely through sound.

In comes the Mivos Quartet whose job it is to make sense of the composer’s intentions and breath life into the notes on the page.  This New York based string quartet consists of Olivia de Prato, violin; Maya Bennardo, violin; Victor Lowrie Tafoya, viola; and Tyler J. Borden, cello.  And let’s just say they are up to the task.  Each movement takes on its individual character but retains a larger connection to the work as a whole.  Perhaps this is also a metaphor for the nature of individuality as part of the larger concept of humanity and why each perspective is vital to our collective survival.

Before I wax too philosophical let me just say that, at least in terms of this recording, this is a document of classical string quartet which also serves as a memorial to the victims it references and, hopefully, as a sort of wake up call to those who, for whatever reason, are unaware of these atrocities.  Ultimately, I suppose, the goal is the amelioration of inhumane practices.  But until then we may find comfort in the beauty which this composer has brought to this work.  This would seem to be a stab at acknowledgement of sacrifice in the name of human rights seeking justice but, for now, we must settle for beauty even if it brings tears which are a mix of both sadness and joy.

3 comments on “Political Classical: Frank Horvat’s “For Those Who Died Trying””