So you read “New Jewish Music” and you think, well, Israel.  At least I did at first.  But the richness of the Canadian musical landscape embraces a wide range of excellent music both pop and classical and this disc (I haven’t heard volume I) serves to illustrate my point. These three works, two for instrumental soloist and orchestra and one for soprano and orchestra are indeed imbued with music that takes its inspiration from the folk traditions common to Jewry around the world.

The musical radar of Canadian producers is truly astounding.  One need only peruse the wonderfully organized Canadian Music Centre web site to get a flavor of which I speak.  You will find classical music by many composers, not just Canadians.  And the range of styles runs the gamut from the experimental (in traditions largely unheard in the United States) to more traditional sounding pieces all of which sound quite substantive to these ears.  Frank Horvat’s “For Those Who Died Trying” made my “best of 2019” list for example. 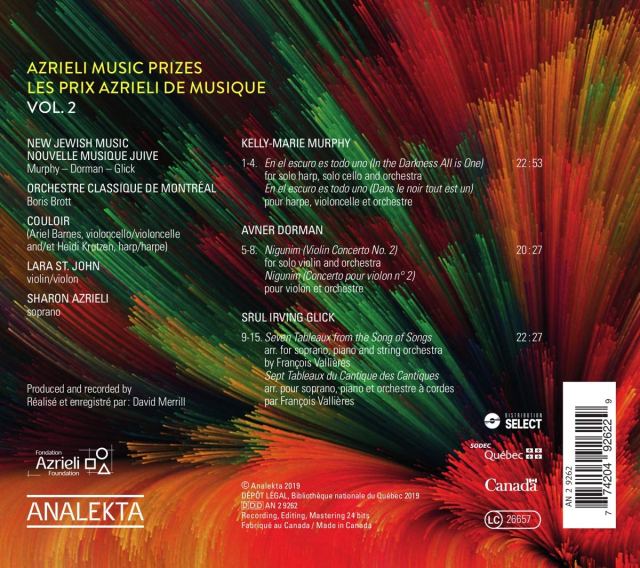 So back to the disc at hand.  More about the amazing Azrieli Foundation and their various projects is worth your attention.  Their efforts are indeed wide ranging and include the arts most prominently along with their other humanistic endeavors.  The disc includes the 2018 prize winning works by Kelly-Marie Murphy and Avner Dorman along with an arrangement by François Vallieres of the late elder statesman of Canadian music, Srul Irving Glick (1934-2002).

Murphy’s “En el Oscuro es Todo Uno” (2018) is for cello, harp and orchestra.  The soloists are the duo Couloir whose album was reviewed previously in these pages.  Its four movements comprise essentially a double concerto (has anyone else done a double concerto for this combo?).  The varied moods in this tonal and melodic work draw the listener in and beg to be heard again.  The piece won the 2018 Azrieli Music Prize.  It is a major work by an established composer whose star continues to rise. 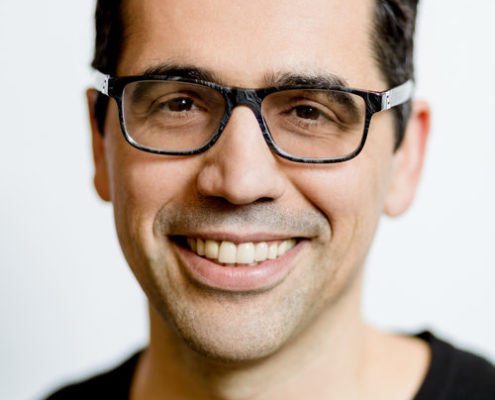 The second work is Avner Dorman’s “Nigunim” (Violin Concerto No. 2) (2017) with the great Lara St. John on violin.  Winner of the 2018 Azrieli Prize for New Jewish Music, this concerto is a delight to the listener as well as a showcase for a talented soloist.  Imbued with references to Jewish folk music, this piece is a melodic delight.  Like the previous work, the listener will likely find themselves returning for another hearing.

The disc concludes with a lovely setting of some of the much beloved texts from the biblical Song of Songs titled, “Seven Tableaux from the Song of Songs” (1992).  It was originally scored for soprano and piano trio and arranged for this recording for soprano, piano, and string orchestra by François Vallieres.  Glick was known both for his concert and his liturgical works.  These texts have inspired countless composers and will doubtless inspire many more with the beauty of the words.  Soprano Sharon Azrieli is very much up to the task and delivers a heartfelt and lyrical performance.

Last but not least the Orchestre Classique de Montréal under the direction of (too little known conductor) Boris Brott deliver a sensitive and nuanced approach to these works.  All in all an extremely entertaining disc that will likely appeal to a wide audience regardless of religious or political affiliations.  This is just great music making.