My review of Carpenter’s Sony Classical release Flash with Substance, Cameron Carpenter Takes on Rachmaninoff and Poulenc, in which he played his transcription for Organ and Orchestra of Rachmaninoff’s beautiful Paganini Rhapsody paired with his exciting rendition of the always welcome Poulenc Organ Concerto. It’s kind of a gutsy move to perform the Rachmaninoff with an organ instead of a piano, bordering on sacrilege for some. Given that programming though, the choices for this recording are a little less surprising as both further stretch the notion of what an organist is actually able to play and demonstrate the sheer breadth of this composer/performer’s musical vision.

Here’s the track list for his Decca Gold debut. Take a good look and meet me at the end of this list:

Yup, the Bach Goldberg variations played on the organ followed by Carpenter’s transcription of Howard Hanson’s (1896-1981) lovely Second Symphony, subtitled, “Romantic” (Trivia: the finale of this work is played over the end credits on the Ridley Scott film, Alien). But I’m willing to wager that neither Hanson aficionados (always among my faves) nor fans of Alien ever imagined hearing this piece played on an organ. But it works.

And that is Carpenter’s genius, or a portion of his genius. He is a man with a mission. He is a virtuoso of the highest order, he is a showman such that earns him a membership in my “glam classical” category, and he is a scholar with wide ranging tastes whose choices have challenged and charmed this humble listener and doubtless many others. My God, the man had a digital portable touring organ custom built for him! It is the instrument upon which he recorded this and the previously referenced disc.

He has antecedents such as Virgil Fox and Anthony Newman, musicians who eschew the stoic musician stereotype (nothing wrong with stoic, either) and engage the audience in their more theatrical manners. And it is the delicate balance between the musicianship and the stage presence that is worth the audience’s time. By my count this is his 8th album released. Check out his web page for more.

Watch any of his YouTube videos where his stage presence is as engaging as his virtuosity. Sure, he plays the “standard repertoire” authoritatively. His Bach is as engaging as his genial manner. This is one exciting composer/performer and it is a joy to watch him develop his brand. All sorts of ideas chase themselves in my mind when I ponder what he’ll do next. But I’d rather be surprised. 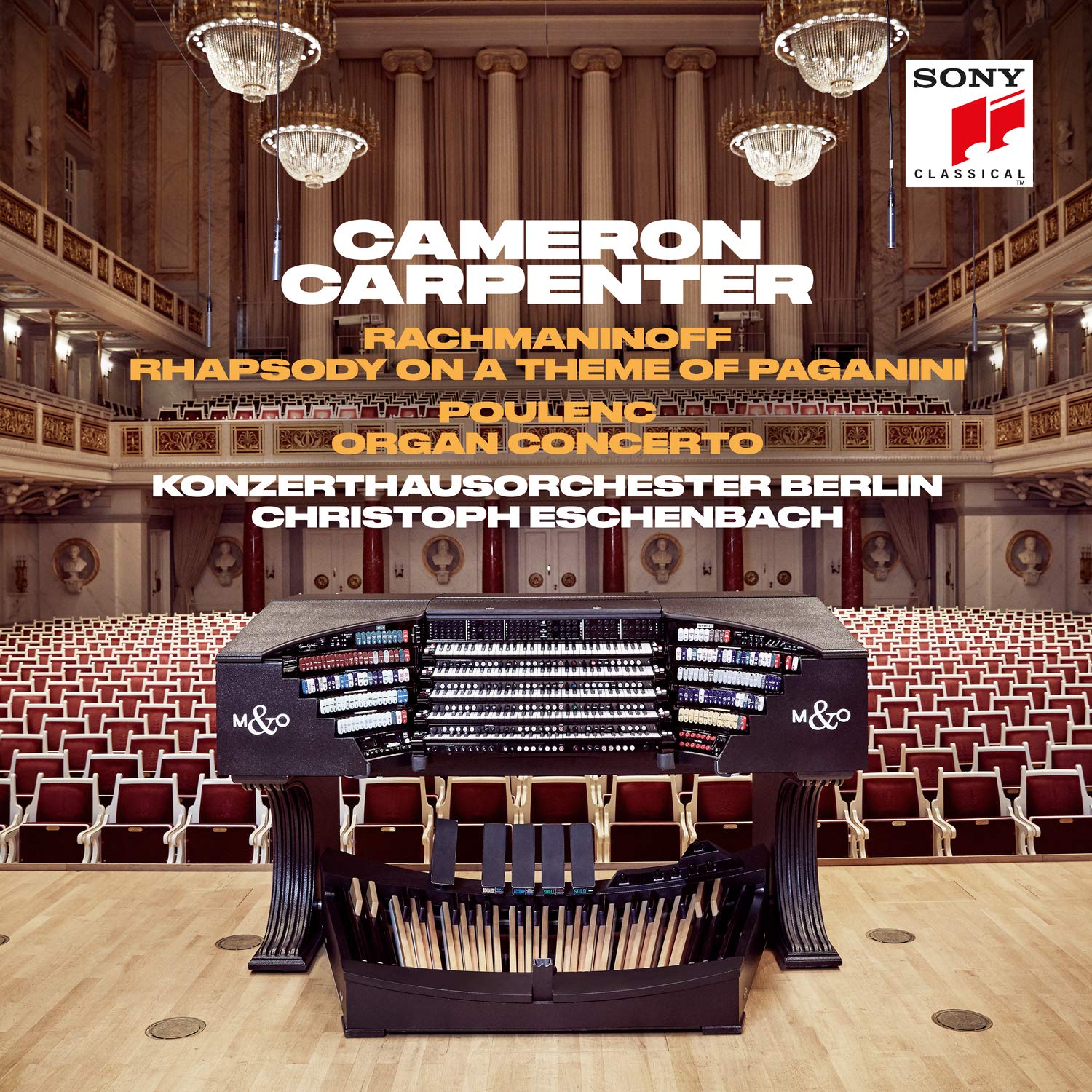 Cameron Carpenter (1981- ) is a spectacular musician and showman.  But don’t let his showmanship fool you.  He is a brilliant and disciplined musician and arranger and belongs to a tradition of flashy virtuosos.  He is also not the first organist to have and use a portable organ either.  Prior to Carpenter people “of a certain age” (your reviewer qualifies) may remember one Virgil Fox (1912-1980) whose musicianship and showmanship delighted audiences of an earlier era.  He too sometimes worked with a portable organ.  In fact he did a show at, of all venues, The Fillmore East with his Rodgers Touring Organ.  This storied home to late 60s rock and rollers included a light show with Fox’s performance of Bach et al.

Another keyboard genius who took on a little flash at one time is Anthony Newman (1941- ) whose enthusiastic and authoritative presentations opened a whole new generation to music of Bach and others as well as introducing them to the organ and harpsichord.  Newman, also a composer of note continues to be a valued concert performer and interested listeners are encouraged to check out his website for more details about this man’s recordings and compositions.

One can’t look at Carpenter with his mod haircuts and stylish clothing without thinking of another wonderful flashy virtuoso, Nigel Kennedy (1956- ), a wonderful violinist with a powerful style and stage presence.  Once again the presence belies the genius just beneath the flash.  Surprisingly he does not have his own web page so I linked to his Wikipedia page.  The Guardian and at Warner Classics also maintain pages on him.  C’mon Nigel, get someone to set up a page for you, dude.

All this is just to put Mr. Carpenter in context (as much for myself as my readers).  So on to the main purpose of this review, the disc.  I don’t know off hand how many discs he has released so far but this one is a fine place to start if you don’t already know this musician’s work.  It includes his work as organist solo and with orchestra, and as arranger in the opening work, Rachmaninoff’s wonderful Rhapsody on a Theme of Paganini (1943).  Originally, of course, the work is for Piano and Orchestra and is a piano concerto in all but name.  (And the disc is indexed so you can choose each variation separately if you wish.) 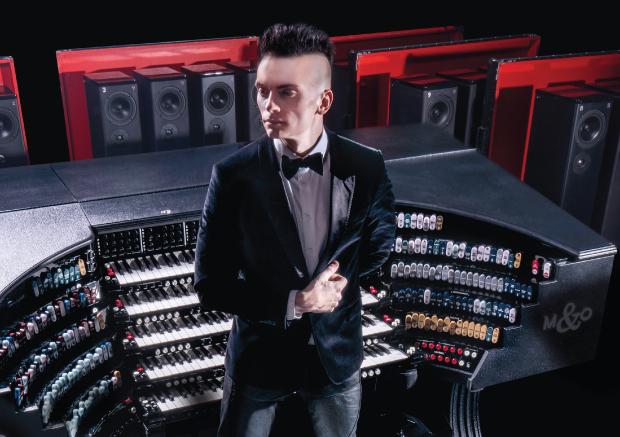 Carpenter posing with his touring instrument

Cameron’s arrangement is effective and entertaining.  I will not give up my love for the original but this arrangement does what a good arrangement should by providing insight to the music.  I can only imagine the difficulties encountered trying to make this piece playable on an organ and balancing the sound with the orchestra.  Fortunately Cameron has a valuable partner in crime here.  The Konzerthausorchester Berlin is led by the brilliant conductor Christoph Eschenbach.  And he uses his portable touring organ which sounds as good as any I’ve heard.  They sound fabulous together and the recording is top notch.

How do you follow the Rachmaninoff?  Well, how about the Francis Poulenc Organ Concerto (1934-8)?  Yes, this concerto for Organ, Strings, and Tympani may be a discovery for many folks.  It is a piece which hooks the listener from the very beginning with a crashing fortissimo chord from the organ.  It goes on to an almost baroque sounding development with modern harmonies throughout.  It is a fitting companion on this disc to the opening piece.

And, finally, the final allegro from the Organ Symphony No. 1 Op. 14 (1898-99) by Louis Vierne (1870-1937) who was the organist at Notre Dame in Paris from 1900 to 1937.  Vierne (who wrote six grand symphonies for solo organ) studied with another grand master of the organ Charles Marie Widor (1844-1937).  He wrote ten organ symphonies and a host of other music as well.  Also worthy of note is the fact that the man who first performed the Poulenc concerto was another grand organist/composer named Maurice Duruflé (1902-1986) who was Vierne’s assistant at Notre Dame for a time.