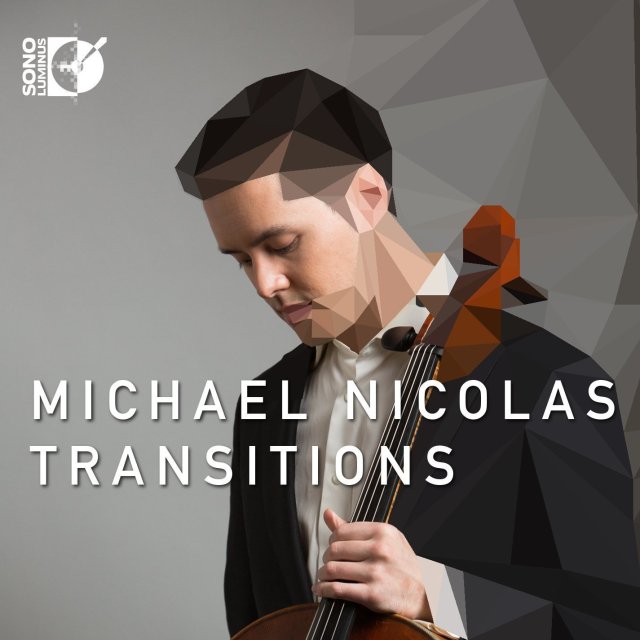 Michael Nicolas is the new cellist of Brooklyn Rider as well as member of the International Contemporary Ensemble and numerous other affiliations.  This French Canadian/Taiwanese young man now residing in New York is definitely an emerging artist to watch and his debut album does much to demonstrate why he deserves serious attention.

This selection of mid/late twentieth and twenty first century cello pieces comprises an intelligent survey of this repertoire introducing new music and providing a younger performer’s take on some classics of solo cello with electronics as well some more recent works.  As he says in his liner notes this survey is concerned with the dichotomy between the solo instrument and the attendant electronics in various guises (even the quasi-Max Headroom cover art seems to reflect this).  Erin Baiano did the photography and Caleb Nei did the graphic design.  If I have a criticism of this fine album it is perhaps that the liner notes provide less detail than this listener prefers so I have tried to provide a few details here.

Beginning with Mario Davidovsky‘s classic Synchronisms No. 3 (1964) for cello and electronic sounds (one of twelve such works for solo instrument with electronics) and continuing with Steve Reich‘s Cello Counterpoint (2003) Nicolas begins his survey with two relatively well-known pieces in this genre and he certainly does them justice.  These pieces serve as Nicolas’ sort of homage to the past which he follows with some very current compositions.

He introduces some pieces unfamiliar to this writer.  David Fulmer‘s Speak of the Spring (2015) is a piece for solo cello with electronics.  Fulmer is a composer/performer apparently worth watching from a quick read of his web site.  As I was unable to determine the date of composition I contacted the composer who graciously responded despite his busy travel schedule: “The work was written last year, in 2015 specifically for Michael Nicolas and this particular project (cello and electronics). Michael had asked me for a piece for his recording project, and having known him (we went to school together) for many years, and admiring his playing so much, I was very interested in writing this piece for him. As for perspective…as a string player, I always enjoy writing string works. I’m interested in the beautiful timbres that the strings have. Tuning is also an important concept for me; at the end of the work, the cello electronics (pre-recorded cello) is scordatura.All of the prerecorded lines are recorded by Michael. I see this as a work written for Michael, played by Michael, and many versions of Michael.”

Next are two pieces by Annie Gosfield for cello and sampler.  Four Roses (1997) and “…and a Five Spot” (2015, commissioned by Nicolas as a companion to the former).  Both pieces are basically lyrical with spectral effects, microtonal passages, extended techniques and the samples of course.  The first piece is more assertive and direct while the second seems more introspective.  Both appear to be typical of Gosfield’s fully developed style.

Next up is a piece by the Icelandic composer Anna Thorvaldsdottir whose album length “In the Light of Air” performed by ICE was reviewed here.  Her piece on this disc for solo cello and electronics Transitions (2015) has a similarly ethereal character but one gets the impression that her approachable style belies complexities that underlie her work.

The last piece is flexura (2015) by Jaime E. Oliver La Rosa, a Peruvian born composer now working in New York.  This piece functions almost like a bookend with the Davidovsky piece that opens this disc (Davidovsky also comes from South America having been born in Argentina).  La Rosa holds a PhD. in computer music from the University of California San Diego and is developing open source software (and hardware) for live performance.  His MANO controller can be seen in the video on his website.  This last piece inhabits a similar sound world to that of the Davidovsky.  It is thorny and modern sounding and works as a showcase for the cellist.  Strictly speaking I suppose this piece is more of a duet in that there are two musicians required to perform it.

As always the impeccable production by Sono Luminus makes for a wonderful listening experience and this is quite an impressive debut for this interesting young musician. Kudos to producer Dan Mercurio recording technician David Angell  and executive producer Collin J. Rae.

Perhaps I am premature in saying this but this release has the earmarks of a being classic survey of the current status of this genre.  One of the joys of such a project is to hear new interpretations of established works and to hear an intelligent selection of new pieces.  Definitely want to hear more from Mr. Nicolas as well as from the composers represented.