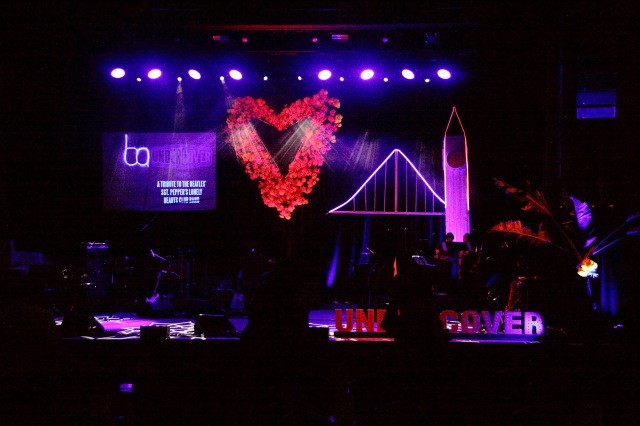 Creative, practical staging and lighting was a unifying factor in this triumph from Undercover Presents.

There was a full house at the UC Theater on this Saturday, June 3rd in Berkeley.  It was the only performance of this homage to the Beatles’ Sergeant Pepper album which was released 50 years ago (actually June 2, 1967).  Most of the performers were not even a twinkle in their parents’ eyes when this landmark of music came on the scene.  The “Summer of Love” was happening in the Bay Area and this album was unquestionably an influence then.  Tonight’s show demonstrated how that influence continues.

The audience was a mix of aging hippies (and non-hippies) and younger hipsters (is it OK to use that term and have no negative connotation?).  Some, no doubt, came for a bit of nostalgia remembering where they were when they first heard the original.  Some came to hear the creativity of local artists meeting such a challenge.

It would have been easy to simply do average covers of the songs and cater only to the nostalgia but Lyz Luke’s Undercover Presents, as usual, aimed higher than that (and hit their mark).  They, under the direction of guest producer Joe Bagale, curated a show of creative interpretations of each of the 13 tracks utilizing some of the finest of the massive talents that call the Bay Area home.  The end result was a true homage from another generation of marvelously diverse artists who put their stamp on the iconic songs without losing any respect for the power of the originals.

Simple but effective stage design by Bridget Stagnitto was reminiscent of the iconic album cover with creative lighting and functional information integrated into the tableau.  Ryan John and Brendan Dreaper were lead sound engineers. 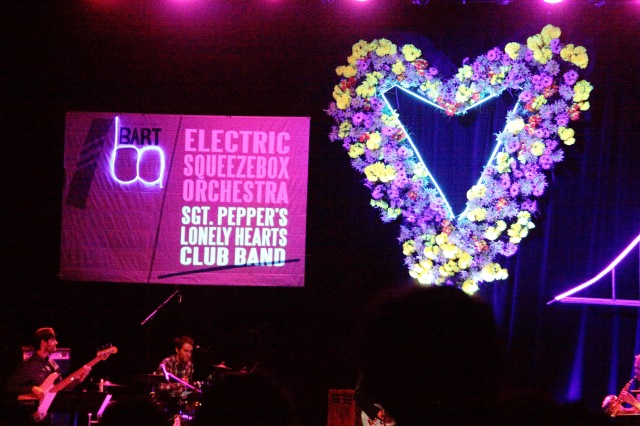 As is customary for these shows the bands played the tracks in their original order beginning with the Electric Squeezebox Orchestra’s instrumental cover of the opening track.  Principal trombone Rob Ewing’s arrangement captured the essence of that opening and effectively set the stage for what was to follow. 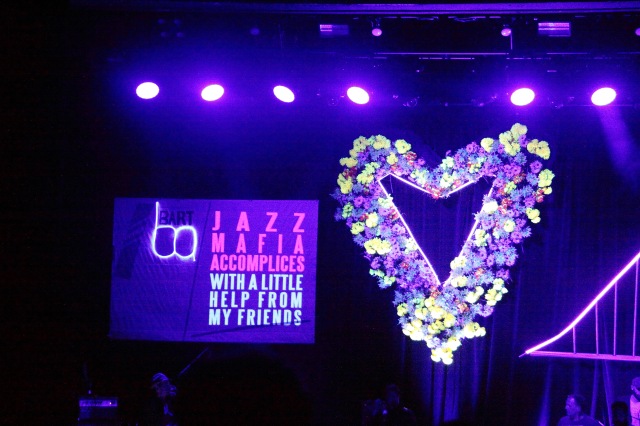 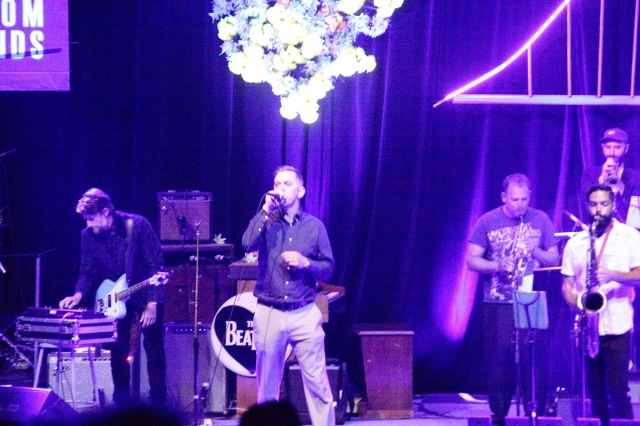 Vocalist Dublin sang a bluesy solo version of “With a Little Help From My Friends”, those friends being the Jazz Mafia Accomplices

Guitarist Jon Monahan takes responsibility for this arrangement which veered just a bit off of nostalgia to deliver a very effective solo vocal version (the original you may recall had that call and answer thing going on) of this, one of the best known tracks on the album.  Though it was not obvious, perhaps there was some homage intended to the late Joe Cocker who first saw the bluesy potential here when he presented his justly famed version at Woodstock in 1969. 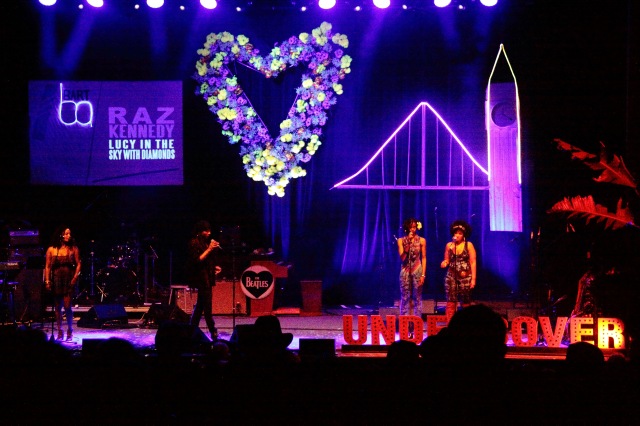 Raz Kennedy made effective use of backup singers in his soulful take on “Lucy in the Sky with Diamonds”.  He shared arranging credit with Nick Milo.  The spirit of the Supremes, Gladys Knight (and of course the Pips), and maybe a touch of James Brown seemed to be present in the house and this arrangement got a great review from the audience.  What a voice! 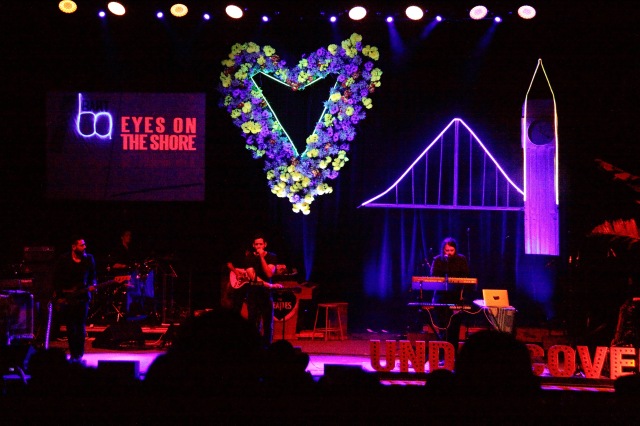 Eyes on the Shore shared arranging credits in their digital synth inflected take on Getting Better.  They went further afield with the material than some and may have briefly lost the pure nostalgia seekers but the arrangement clearly succeeded in pleasing the crowd. One would expect that psychedelia be transformed by the digital world, right?  And so it was. 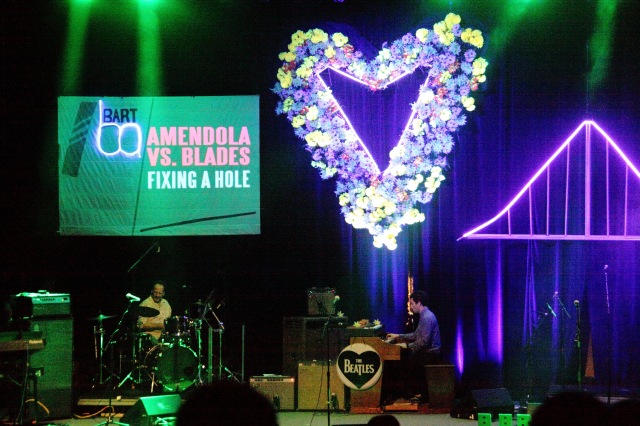 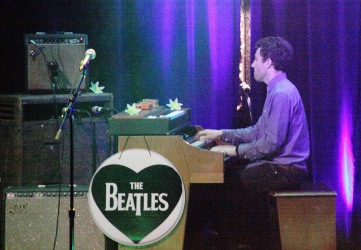 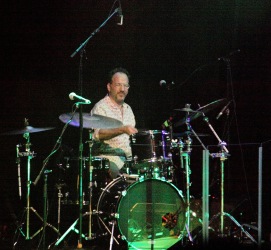 The Avant Jazz Funk duo of Scott Amendola on percussion and Will Blades on Hammond Organ (how’s that for nostalgia?) and Clavinet turned in a very intense and rich improvisational battle in their purely instrumental version of “Fixing a Hole”.  Sometimes the melody was there and sometimes it was transformed in a musically psychedelic way that went quite a distance from the original.  But the use of the Hammond Organ and Clavinet themselves provided reassurance that they wouldn’t go too far.  The performances were blazingly intense and the whole house felt it. 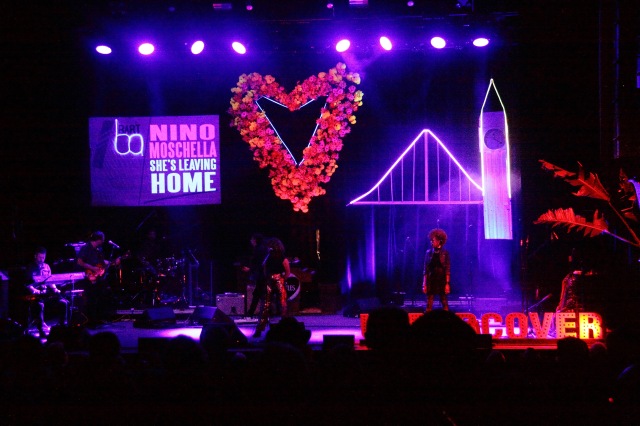 We again were treated to soul with backup singers as Nino Moschella transformed the innocent ballad of adolescent alienation, “She’s Leaving Home”, into a more darkly hued version that seemed to reflect an understanding of the loss of that innocence that we all must face eventually.  Nothing somber here but clearly a different understanding consistent with the overall mission of having another generation’s way of remembering this material. 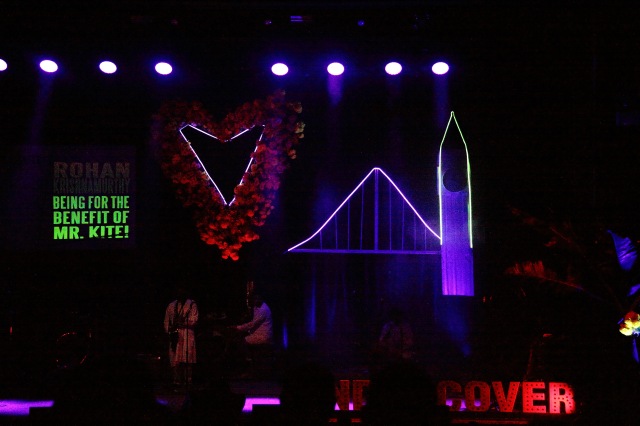 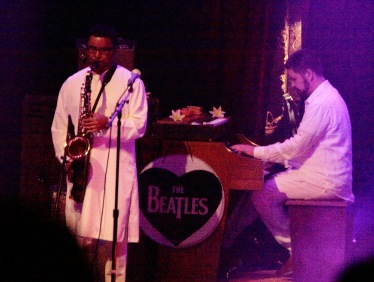 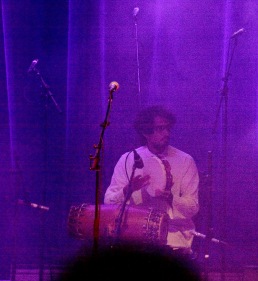 South Asian music and philosophy are inextricably linked to the psychedelic sounds of the mid to late 1960s and nowhere is this more obvious than with the Beatles whose study of Transcendental Meditation with their guru Maharishi Mahesh Yogi (born Mahesh Prasad Varma 1918-2008) while George Harrison studied sitar with Pandit Ravi Shankar (1920-2012).

Rohan Krishnamurthy (Mridangam, Hadjira frame drum), Prasant Radakrishnan (saxophone), and Colin Hogan (keyboard) share credits for their creative instrumental arrangement of “For Mr. Kite”.  Eschewing lyrics (which are etched in most of the audience’s minds anyway) they performed a stunningly unique rendition of this familiar song. Interestingly these musicians trace their influences to the southern Indian Carnatic tradition (somewhat different from the Hindustani traditions which influenced the Beatles) adding yet another layer of richness to the evening’s goings on. 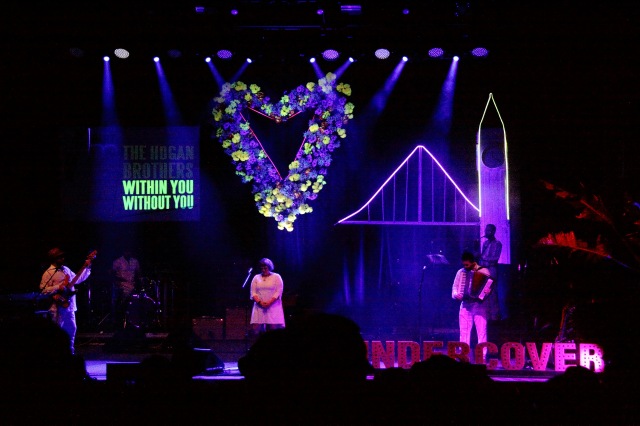 Colin Hogan indicts himself yet again in his arrangement of “Within You Without You”, that spacey Hindustani inflected song.  The Hogan Brothers (Steve Hogan, bass; Colin Hogan, accordion; Julian Hogan, drums; Moorea Dickason, vocals; Charlie Gurke, baritone sax) turned in a marvelous world fusion rendition of the tune (lyrics and all) to a hugely appreciative response. 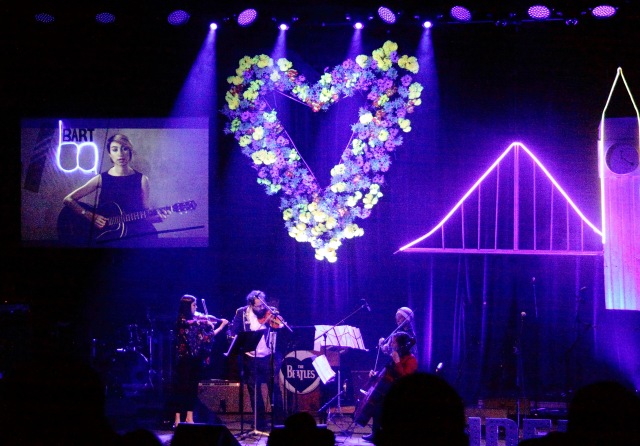 Iranian born Sahba Minikia, steeped in both Iranian and western classical traditions provided a touching arrangement of the classic, “When I’m Sixty Four”.  Featuring Mina Momeni on guitar and vocals (on video) accompanied by the Awesöme Orchestra in a song whose premise looks to the future as far as this evening looked into the past to ponder the endurance of romance. 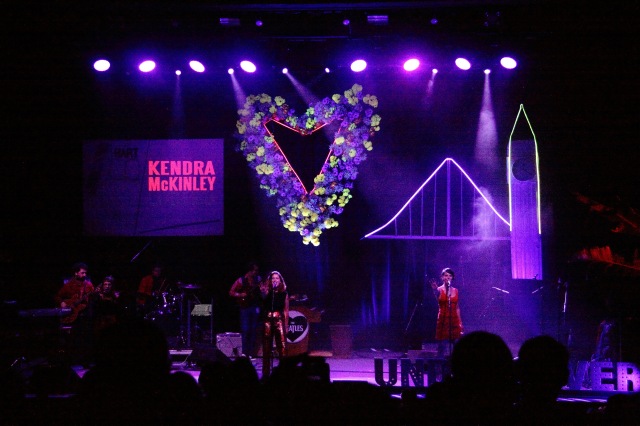 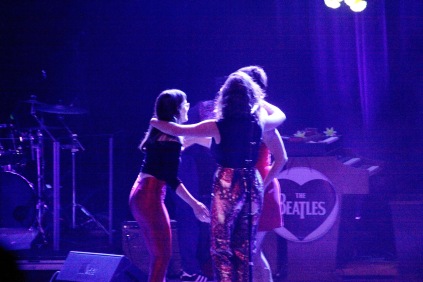 Vocalist Kendra McKinley practically turned “Lovely Rita” into a feminist anthem with some retro pop group choreography and background vocals to boot.  The visuals and the energy of the performance practically had the whole house dancing. 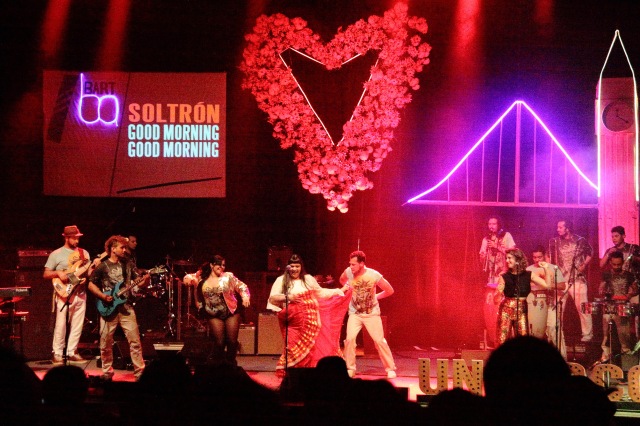 Soltrón added Latin percussion and energetic dance to the already electrified atmosphere with their arrangement of the raucous “Good Morning”.  Kendra McKinley could be seen and heard tying in her energy from the previous performance as backup singer here. 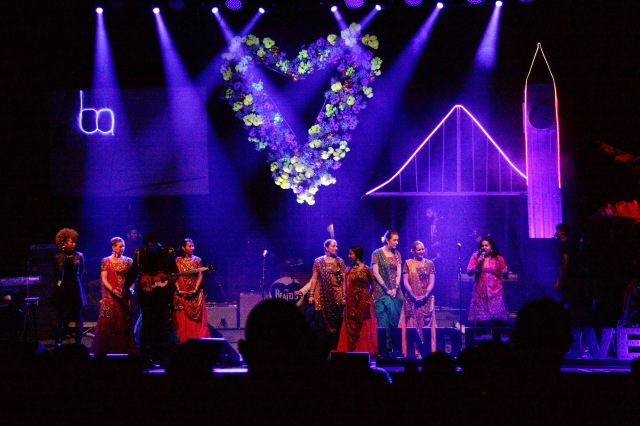 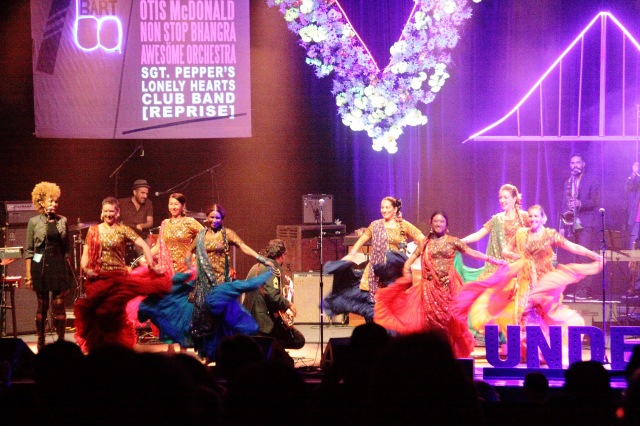 The dancing energy was carried on by the colorful and energetic dancers of Non-Stop Bhangra.  They accompanied Rohan Krishnamurthy and Otis McDonald in Joe Bagale’s rocking arrangement (replete with lyrics) of the reprise of the opening.  It was like a live action version of the studio executed original performance with a stage filled with ecstatic musicians and dancers. 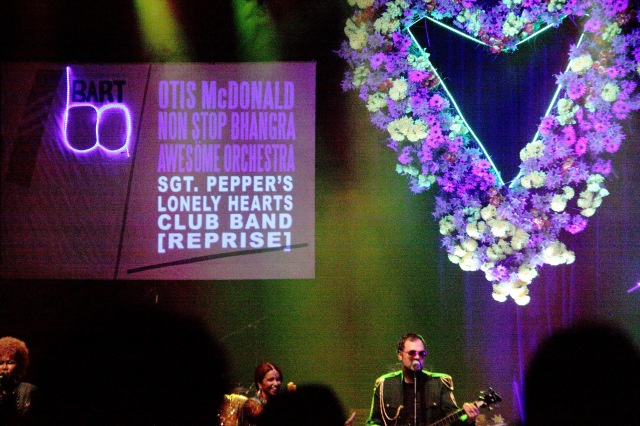 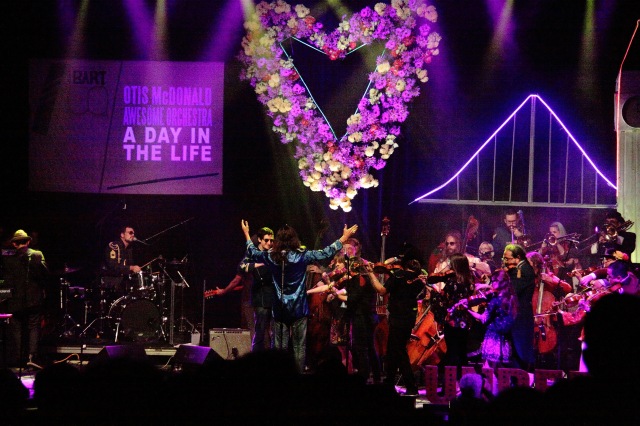 The apocalyptic, “A Day in the Life” concluded the mission of homage and nostalgia in a bigger than life tableau of talent and diversity that connected the “there and then” to the “here and now”.  The famous extended last chord crashed in a peak of energetic music making to bring the performances to a close. 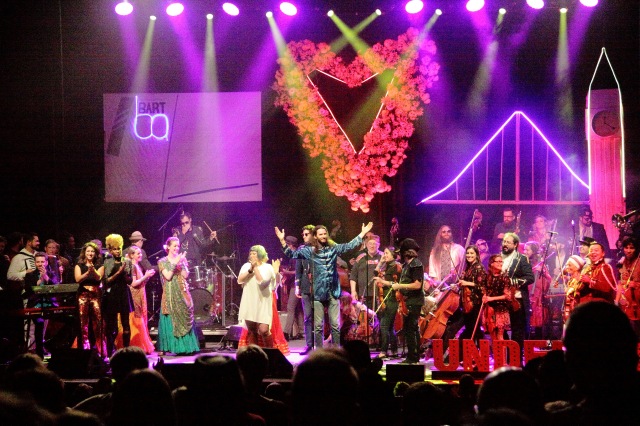 The visuals were strongly reminiscent of the iconic album cover. 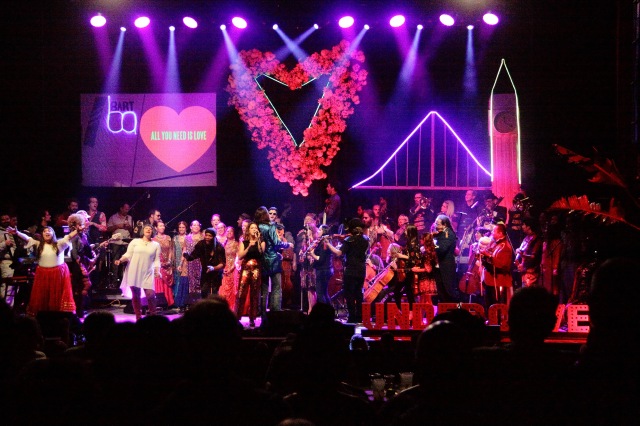 There was no need to encourage the audience to sing along to the encore of “All You Need is Love”.  Fifty years hence we still need it and if we still don’t have it everywhere at least we had it here this night.