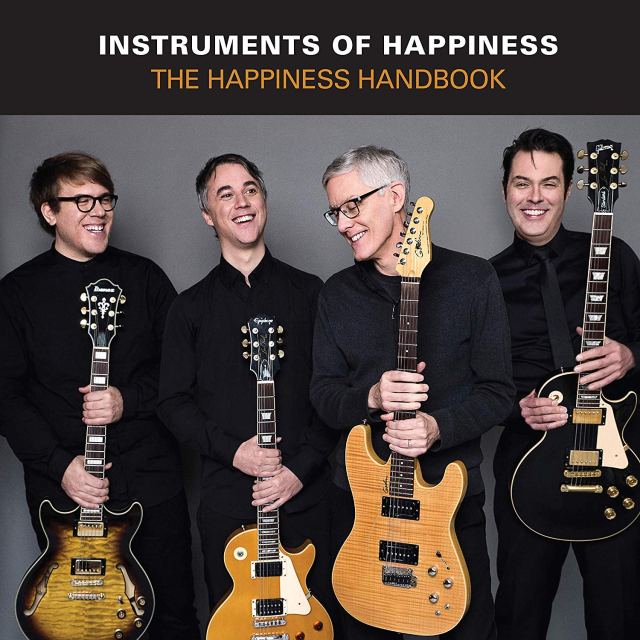 This is, by my count, the third Tim Brady CD released by Starkland.  The other two, Instruments of Happiness and Music for Large Ensemble, represent only a small portion of his output and I highly recommend exploring his other releases.  You can find a listing on his web page here.  Since being introduced to Brady’s work in the Instruments of Happiness album I have purchased and enjoyed several of his earlier CDs.  Initially one necessarily wants to lump Brady in with the massed guitar masters such as Glenn Branca, Jeffrey Lohn, and Rhys Chatham.  That’s a fine starting point but as one listens to Brady’s work it becomes clear that he has his own vision and that vision is shared with like minded artists.  Some of those like minded artists are on this fine CD.

In some ways this is a sequel or a volume two to the Instruments of Happiness CD of 2016.  Despite this being chamber music with only four musicians the nature of electric guitars is to make a bigger sound.  It is always interesting to see how different artists work with a given ensemble configuration and that is the real thrill here.  One track features Brady’s music and the other tracks feature Scott Godin, Jordan Nobles, Maxime McKinley, Gordon Fitzell , and Emily Hall.  All are individual creations commissioned for this quartet.  The liner notes are definitely useful but there is much to be gleaned from the ‘composers’ web sites as well, trust me.

The disc contains six works on 10 tracks and, like the earlier Instruments of Happiness release on Starkland, this is an interesting and revelatory sampling of the marvelous invention of these composers and the amazing range and utility of the electric guitar.  If anyone questions the place of electric guitars in classical music this is a fine example of some of the potential and a teaser for the future as well.  The vision is more like that of a string quartet (another ensemble that has managed to establish itself) seeking innovative composers for some portable music making.

Familiarity with the composers mentioned earlier (Branca, Lohn, Chatham) will provide the listener with a context but the work here is seemingly almost unrelated to their work excepting that they used electric guitars.  This is a new generation of composers to whom, electric guitars were a given, not a new invention and whose use, increasingly ubiquitous in classical music, is simply one of their compositional options.

And now the music.  The album opens with an homage to the late British composer Steve Martland (1959-2013) whose rhythmic, driving music resembles that of Michael Nyman but closer to a rock aesthetic.  Martlandia (2016) by Scott Godin engages the listener (and will likely send him/her in search of Steve Martland CDs) with its long tone meditative beginning that acts like a slow introduction to a symphony of the classical era and then moves into faster quasi-minimalist sections that remind this listener favorably of some of Steve Reich’s work.  This is practically a miniature symphony.  It is an engaging piece and a loving tribute to the late composer.

Equal and Opposite Reaction (2016) is Mr. Brady’s submission to the album.  It also opens with a slow section and then goes into the manic virtuosity that is typical of Brady’s work.  I’m not saying he can’t write a decent slow movement, he can and does, but much of his work moves rather quickly and with a variety of guitar techniques in his expanded palette of sounds.  Like all the works here the harmonic language is largely tonal and the development of thematic material owes much to classical compositional techniques though his rhythmic choices owe something to rock and jazz.

Jordan Nobles’ Deep Field (2016) is a tribute the the iconic Hubble Telescope.  (If you haven’t seen at least one photo from Hubble’s catalog then you may have been in suspended animation for the last 20 years.)  Suffice it to say that the Hubble’s images have inspired a great deal of artists and this is yet another example.  This is one of the more meditative pieces on the album at its opening but, like the other pieces there are several contiguous sections.

Reflets de Francesca Woodman (2017) by Maxime McKinley is another homage.  This time the subject is an American photographer Francesca Stern Woodman (1958-1981) who took her own life in 1981 and left a posthumous legacy.  Aptly this is one of the more somber and disturbing tracks on the album. I’m sorry to say I don’t know her work but this tribute certainly sparks interest.

Going with that melancholy theme is the next track, Gordon Fitzell’s Bomb Crater Garden (2016) is the most avant garde sounding track (as well as the longest at 11:16) and the most exquisitely disturbing in its post apocalyptic vision.  The piece has optional narration and video but the music gives the listener a pretty good idea of what those images and ideas are.  So much for happiness.

Finally we have The Happiness Handbook (2016) by Emily Hall.  Like Brady’s flexibly peopled ensemble of the same name the theme of happiness comes to the fore once again.  As explained in the liner notes the notion of guitars as instruments associated with happiness is the concern.  There are five movements varied in style that make this piece function like a little symphony.  It is a celebration of the plethora of techniques and compositional possibilities of this modern guitar ensemble and will leave the astute listener ultimately in a happy place.