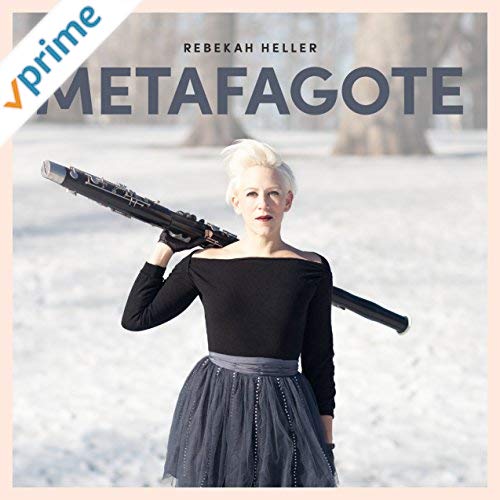 For this listener, traversing contemporary music concerts in the 1980s there appeared a trend to modify the traditional look of classical performers. The first striking example I can recall is the venerable Kronos Quartet performing all in tight black leather outfits. And there are performers who have an intentionally different look such as violinist Nigel Kennedy or Kathleen Supove whose look is decidedly unconventional. Focusing on attire could conceivably detract from a musical performance but the previously mentioned performers have in common with the performer on this disc both virtuosity and a distinctly different look which seems integral to their performance delivering decidedly unconventional music.  The photography by Corrie Schneider creates a striking and evocative cover image giving her a sort of superhero ambiance.  Why not?

Rebekah Heller, of course, is also one of the members of the wonderful ICE Ensemble, one of the finest working chamber groups focusing on contemporary music. ICE has in common with groups like Bang on a Can, Alarm Will Sound, ACME, and others the fact that they are populated by some of the finest young musicians who seem to be able to meet any challenge…er, commission thrown at them. In addition many of the musicians in these groups are also interesting composers.  The others have a profound interest in new music that match their skills and passions oh so well.

In Metafagote Rebekah Heller presents 4 works on 4 tracks.  Rand Steiger (1957- ) is a graduate of the Manhattan School of Music and Cal Arts.  Steiger has been at UC San Diego since He is a 2015 Guggenheim Award recipient and though his discography is adequate this writer sees his name, hears his music too infrequently.

Steiger’s work opens this disc with Concatenation (2012) for bassoon and live electronics.  Steiger is skilled in writing for both conventional instruments and for high tech electronics including spatialization, live processing.  Steiger’s work is assertive, pretty much freely atonal, and packs a punch emotionally if memory serves.  There was a vinyl record (this composer is younger than me by one year and I’m guessing still hoards at least a selection of LPs.  The work was Hexadecathlon: “A New Slain Knight” (1984), basically a horn concerto for horn with chamber ensemble.  It burns in my brain still, wonderful 6 minute cadenza at the end too.

Back to Concatenation, it is a sort of all consuming experience, a sound bath if you will.  The timbres achieved with the combination of bassoon with electronics creates some grand, almost orchestral textures.

The second work is by one Jason Eckhardt (1971- ), a name vaguely familiar but his work is new to me,  Eckhardt earned a B.A. from Berklee in 1992 followed by an M.A. (1994) and a D.M.A. (1998).  He has studied with James Dillon, Jonathan Kramer, Milton Babbitt, Brian Ferneyhough, and Karlheinz Stockhausen.  That provenance gives one an idea of what to expect…complexity.  And he dishes that out for solo bassoon.  Heller is up to the challenge in this piece, “Wild Ginger” (2014) from a series of pieces based on native plants in the Catskills.  Again, why not?

The third track contains, “Following” (2014) for solo bassoon from a composer whose inspiration also sometimes comes from plants.  Dai Fujikura (1977- ) is a prolific Japanese composer who also comes from a legacy of complexity having studied with the likes of Boulez, Taketmitsu, and Ligeti.  Fujikura’s music may be complex but his music tends to have a softer edge, more like Takemitsu than Boulez.  Again Heller demonstrates her technical skills that rise to meet the challenges posed here.

Last but not least is a piece as large and encompassing as the Steiger.  Felipe Lara (1979- ) is an accomplished Brazilian composer.  He is represented here  by, “Metafagote” (2015), the most recent of the compositions here.  It is scored for bassoon and 6 pre-recorded tracks.  One is naturally put in the mind of Steve Reich’s counterpoint series for soloist playing against multiple pre-recorded similar instruments.  The piece also can, and has been, performed by a soloist with 6 other bassoonists.

While the Reich notion is not the worst place to start, this piece is anything but minimalist.  Rather it is distinctively modernist.  It is a virtuosic exploration of some fascinating possibilities of the lowly bassoon.  Lara owes more to free jazz at times in this epic, almost a concerto, piece.

I don’t know how many bassoon fanciers are out there but if you like new and experimental music of a virtuosic nature this is a great bet.