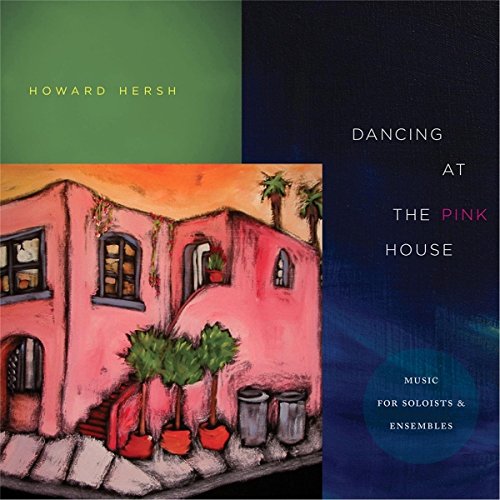 This latest release by Howard Hersh reveals more of his range as a composer.  His previous release focused on one large concerted work for piano and chamber orchestra as well as some virtuosic writing for piano and for harpsichord.  This disc (worth a listen if only for the return engagement of the pianism of Brenda Tom) focuses on some smaller chamber ensembles and a look at the composer’s more impressionistic moods.

This writer is left with the notion that each piece seems to be an intimate telling of a story.  Though the stories are not explicit, each piece has a distinct narrative character.  Mary Rowell handles the multi-track violin parts on Madam’s Tavern (2014).  The piece has an almost symphonic character evoking a variety of styles and meandering most pleasantly through a musical narrative whose details are not as important as the fact that the piece engages very successfully on a purely musical level.  It is written for solo violin with a chorus of some 15 tracks of violin accompanying.

Loop (2006) is a sort of cyclic quasi-minimalist work featuring Jonah Kim on cello, Brenda Tom (gently) on piano, and Patricia Niemi on vibraphone.  It is a dream-like, perhaps even impressionistic piece whose structure and compositional techniques serve the end goal of being a charming aural object.

I Love You Billy Danger (2012) was written for pianist Brenda Tom.  Here she demonstrates her virtuosity and her dramatic and dynamic range in a piece which, though related to Liszt according to the liner notes, seems to evoke the rather Lisztian master Frederic Rzewski as well.  Tom is at her fines with this challenging work and she conveys the narrative well.

Night (2013) seems related to the earlier Loop by virtue of being a percussion piece but also by its gentle evocation of a shimmering musical narrative punctuated with a clarinet part that alternately hides within the percussive sounds and comes wailing out  in jazzy/bluesy moments.  This writer was left with the notion of Gershwin haunting the score (but maybe that is because this review is being written in the Halloween season).  José González Granero is on clarinet, Patricia Niemi on marimba, and Nick Matthiessen on percussion.

Dancing at the Pink House (2006) is a musical narrative for clarinet and piano that Hersh has featured as a teaser on his website.  It was written for Patricia Shands, clarinet and is accompanied by James Winn on piano.  Shands is the owner of said Pink House and she seems to be having a lot of fun with this playful but substantial piece.  Both of these musicians appeared on Hersh’s 2007 CD release, Pony Concerto (Albany Records).

Dancing at the Pink House is a valuable addition to Hersh’s discography and reveals more of his range as a composer.  This is a highly entertaining recording and leaves the listener wanting more.