The three days of concerts scheduled for March 6, 7 and 8 of this year at the beautiful SF Jazz Center will mark the 20th anniversary of Other Minds opening the ears and minds of bay area new music audiences.  Previously composers could only appear once at this festival (thought performers frequently return) but the anniversary celebration is marked by the return of several alumni.  In fact the entire program consists of composer alums.

Other Minds is an annual festival of new and unusual music curated by bay area composer, producer, broadcaster Charles Amirkhanian and his crew at Other Minds.  Along with co-founder, now president emeritus Jim Newman and a varied and sometimes changing crew of talented and dedicated archivists, fund-raisers and coordinators this festival was born in 1993.

Every year (though the actual month has changed for various reasons related to venue availability and funding) an international group of composers is brought together first at the Djerassi Arts Center just west of Palo Alto where they share their work and ideas with each other for a week in preparation for the performances of their work to come at the concert series.  This residency is a sort of private retreat open only to the composers and the staff of the center.  And given the range of musical styles it must be a fascinating thing to witness as composers largely unfamiliar with each others’ work gather to share and wonder at each others’ strange and innovative ideas.  Who knows what seeds may have been sown?

Sadly, Dr. Carl Djerassi who founded the center passed away on January 30, 2015.  His arts advocacy will live on through his beloved Djerassi Arts Center and this OM 20 will be a testament to that legacy.

What makes this festival so significant is the fine tuned and prescient nature of the selected composers.  Just a quick look at the list of composers and performers who have participated in the past looks almost like a who’s who of new music as practiced in the late 20th and early 21st centuries.  One of their commissions, Henry Brant’s (1913-2008)  won a Pulitzer Prize (Ice Field, 2001, Pulitzer Prize, 2002).  And it is programming with a uniquely west coast ethic, whatever that means.  I just know these programs are a different take on new music than that of the east coast.  Not a value judgement there, just a celebration of a different, equally important, point of view.

WHY YOU SHOULDN’T MISS OM 20

First you will find a generous (though hardly complete) selection of music by Charles Amirkhanian (1945- ) who has been at the helm of this festival from the beginning and was for 23 years the music director of KPFA radio where his programming and interviews with composers and performers of new music spanned a wide and eclectic gamut of styles and techniques.  Perhaps most significant has been his support of northern California composers whose work would otherwise have been poorly represented.  Amirkhanian’s keen ear has introduced a great deal of new and interesting music to bay area audiences and beyond.

In addition to his abilities as producer and interviewer Charles is also a noted composer.  Trained as a percussionist, he has written quite a bit of music which deserves recognition for its innovation.  His best known works are those with tape recording, sound poetry and the uses of language.   His music will be featured in several performances and will be a welcome and tantalizing complement to the overall diverse tone that characterizes OM programming.

Amirkhanian’s oeuvre will be represented by “Rippling the Lamp” (2007) for violin and tape, three short pieces for voice and tape, “Dumbek Bookache IV” (1988), “Ka Himeni” (1997), “Marathon” (1997) and, on the third concert, “Miatsoom” (1994-97), a piece based on sounds (vocal, ambient and musical) recorded during the only trip Charles and his father made to Armenia in 1994.  This approximately half hour work is typical of his ability to create a fascinating and meaningful sound collage.  Miatsoom is Armenian for reunion, indeed the apparent theme of OM 20.

In an uncharacteristically political expression this year’s festival is in commemoration of the 100th anniversary of the Armenian genocide.  Amirkhanian is the descendant (both he and his father Benjamin were born here) of Armenian immigrants and grew up in Fresno, California.  The genocide of 1915 (also the year of Benjamin’s birth) was in fact only the most infamous and fatal of the ongoing abuses by the Ottoman Turk government in response to Armenians seeking equal rights (a familiar social issue both then and still today).  Charles has been tactfully apolitical in his programming but his music at times has paid respectful homage to his ancestry and their struggles. It seems right to pay respect to one’s ancestors and perhaps acknowledge that we still have much to do and learn in our imperfect world.

Appropriately the esteemed Armenian composer Tigran Mansurian (1939-  ) has been welcomed back and will be represented by two major works.  Romance for Violin and Strings (2011) and Canti Paralleli (2007-8) for soprano and string orchestra are both scheduled for the third concert of the festival.  I was unable to find any details about these pieces but Mansurian’s work certainly deserves to be better known and these performances are a welcome opportunity to hear this major compositional voice.

Homage will be paid to two past masters who are no longer with us, American  composer Lou Harrison (1917-2003) and Australian composer Peter Sculthorpe (1929-2014).  Harrison was a beloved bay area figure whose work with gamelan and other world musics led him to experimentation with alternate tuning systems.  Harrison will be represented by his “Scenes from Nek Chand” (2001-2) played on a National Steel Guitar tuned in just intonation by the wonderful guitarist David Tannenbaum who will also play Sculthorpe’s “From Kakadu” (1993) for conventionally tuned classical guitar.  Sculthorpe, born in Tasmania, was one of Australia’s best known composers who essayed widely in chamber, choral and orchestral music. His 14th string quartet (with didgeridoo played by Stephen Kent) “Quamby” (1998), played by the amazing Del Sol Quartet (who recorded all 18 of the composer’s string quartets) is scheduled to conclude the first concert. 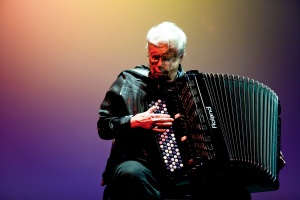 Pauline Oliveros (1932- ) is one of the grand ladies of new music.  Her theoretical work in defining music and the act of listening as partners in the creative process and her subsequent compositions including ground breaking work with early electronics with the San Francisco Tape Music Center and later at Mills College characterize her wide range of interests and her insights.  Her principal instrument, strangely enough, is an accordion and she will be performing as well.  OM has commissioned a new work from her, “Twins Peeking at a Koto” (2015, world premiere) for two accordions and koto.  to be presented at the second concert.  Playing the koto will be Miya Masaoka (1958-  ) whose second string quartet will receive its world première on the first night by the  Del Sol Quartet.  Masaoka, Japanese/American native of Washington D.C., is a New York based composer whose work brings her to the west coast frequently where she is a founding member of the Bay Area experimental improv trio Maybe Monday.  Her work involves improvisation and frequently uses unusual sound sources like bees and even cockroaches (not to worry, no insects are slated to perform) and creates site specific multi-disciplinary works in collaboration with musicians and dancers.

Errolyn Wallen (1958-  ) can be said to embody the OM ethic.  Born in Belize, Wallen  left the Dance Theater of Harlem to study composition in England and says of her work, “We don’t break down barriers in music…we don’t see any.”  Her Percussion Concerto (1994)  was the first work by a black woman to have been performed at the London Proms Concerts.   Her “London’s Burning and other songs” will be played on the second night by the SOTA string quartet and Wallen voice and piano. 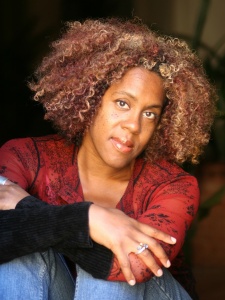 Don Byron (1958- ) similarly states that he strives for “a sound beyond genre”.  Steeped in classical, jazz and folk musics, Byron’s quartet (Don Byron, clarinet; Aruán Ortiz, piano; Cameron Brown, bass; John Betsch, drums) is featured at the conclusion of the second night of the festival. 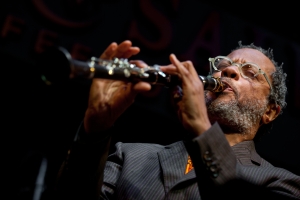 Maja S.K. Ratkje (1973- ) from Norway whose work is perhaps related to Mr. Amirkhanian’s  in her exploration of the possibilities of the human voice.  Her “Traces 2” (2014-5) will receive its U.S. premiere on the first night’s concert. 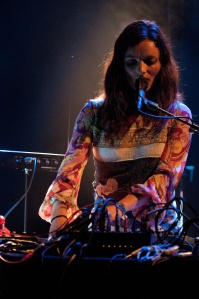 The third concert will be unusual for two reasons.  First it will take place beginning at 3PM and, second it will feature a full orchestra.  This night will conclude with U.S. premiere of the Second Symphony (2014) by Michael Nyman (1945- ) .  Nyman is perhaps best known for his numerous wonderful film scores but is also highly accomplished in his work in the concert hall.  In the past three years Nyman has turned for the first time to the Symphony form and has completed to date no fewer than 11  symphonies.  Quite a feat. Tickets still available as low as $15/night.  Quite a festival!