Duo Noire consists of Thomas Flippin and Christopher Mallet.  These guitarists are graduates of the Yale School of Music.  For this, their debut album, they have chosen to feature a program of all women composers.  Add to that the fact that these fine emerging artists are African-American (also the first African American graduates of Yale School of Music) and you have a glorious celebration of gender/cultural diversity as well as some mind blowing compositional efforts ably handled by these visionary musicians. 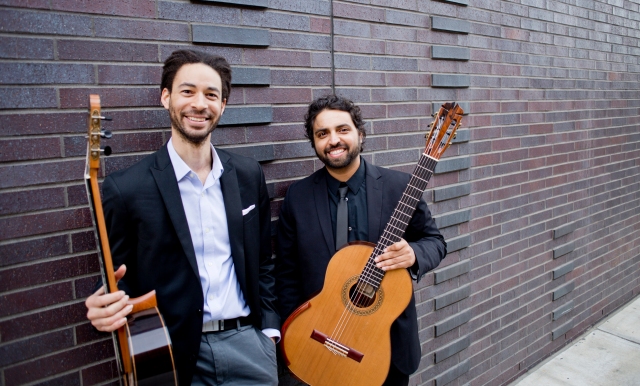 The demographics are necessarily prominent especially in these contentious times when racial and gender discrimination are, sadly, huge and difficult issues that remain largely unresolved.  But the real story here is creative music and musicians.  This duo seems to have a unique sound and are clearly schooled in their instruments to the point that they even seem to be expanding the very possibilities of a guitar duo.  Above all this is an intelligent album.

The composers Clarice Assad (1978- ), Mary Kouyoumdjian (1983- ), Courtney Bryan (1982- ), Golfam Khayam (1983- ), Gity Razaz (1986- ), and Gabriella Smith (1991- ) are mostly unfamiliar names to this writer and, likely, to most listeners.  But don’t let that put you off.  This is a highly inventive set of compositions and these performers are doing the job of discovering these compositional talents.

There on six compositions on this thirteen track CD which has over an hour of music on it and it appears to be a landmark release for identifying new composers contributing to the guitar duo genre.  Guitar duos are not an unusual instrumental grouping but this collection suggests fresh new directions that extend the possibilities of this instrumental configuration. 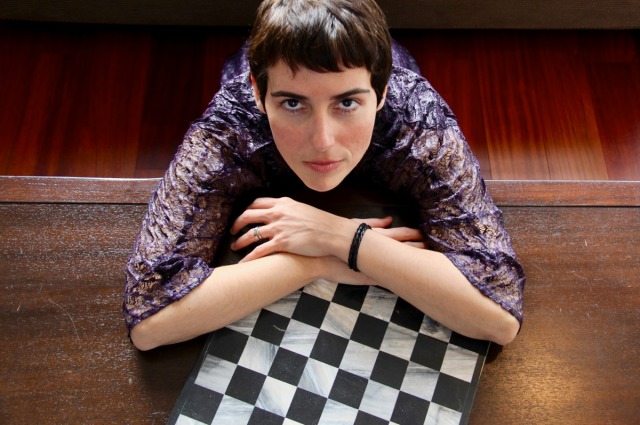 Of course the guitar duo is hardly a new idea.  On the more pop side we have had Les Paul and Mary Ford and on the classical side many listeners will be familiar with Sergio and Odair Assad.  And that brings us to Clarice Assad who is the daughter of Sergio Assad.  Her composition,  Hocus Pocus (2016) is in three movements, each ostensibly describing an aspect of magic.  Clearly Assad is familiar with both traditional and extended techniques of composition for guitar.  This is a sort of impressionistic work which calls upon the musicians to utilize a variety of techniques to evoke moods and images of each of the three movements, Abracadabra!, Shamans, and Klutzy Witches.

Byblos (2017) by Mary Kouyoumdjian embraces her Persian roots as well as the conflicts which have plagued this area of the world.  Here she is evoking an ancient town in Lebanon.  This is the most extended single movement on the disc and demonstrates the composer’s mastery of form while it challenges the instrumentalists to evoke the ancient and mystical sounds of her classical culture. 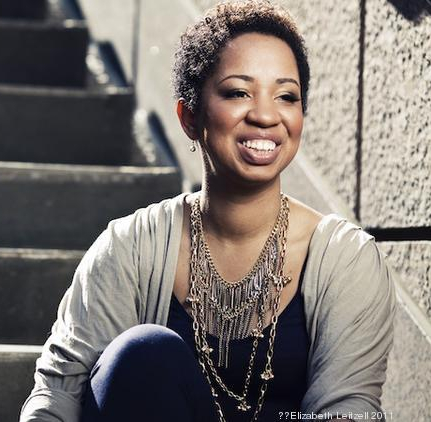 The only African-American composer featured on this recording is Courtney Bryan.  Her “Solo Dei Gloria” (2017) which was commissioned by Duo Noire takes the listener on a sonic journey through the composer’s impression of the inner process of prayer.  That’s a mighty abstract concept and she manages accomplish it with just the two guitars (and, of course, two talented musicians).

The three movement, “Night Triptych” (2017) was also written for Duo Noire and has the honor of being the title track for this truly eclectic and innovative album.  This has more the feel of an abstract musical work than the others featured but one does hear the influences of her ethnic origin (Persian/Iranian).  Despite the more extended nature of this composition this work, like all the works presented here, is a sampling of the composer’s work and the astute listener will have many reasons to seek out more of this young composer’s work. 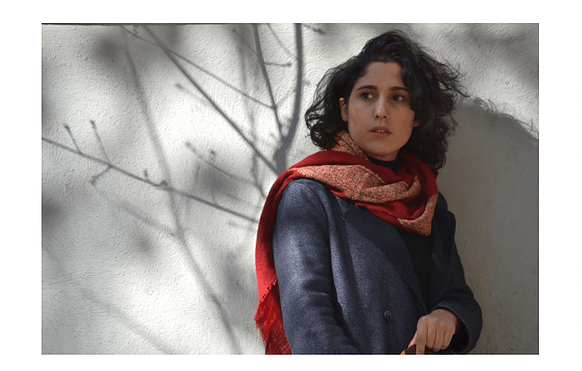 Four Haikus (2017) was also written for Duo Noire.  This Iranian born composer is rapidly becoming established internationally as an accomplished composer.  Like the previous work these four short movements are of a more abstract nature.  Another sampling that will prompt listeners to seek out more of this emerging composer’s work.

Last but not least is the second most extended work here by the youngest of the composers represented.  “Loop the Fractal Hold of Rain” (2017) is another Duo Noire commission.  This is probably the most abstract and modern composition on the disc.

Many works here have at least the suggestion of dealing with politics, conflict, and the impact of such things on individuals.

It is admittedly unusual (though clearly not risky) to program compositions by all women composers.  This is a wonderful collection with performances that are incisive and intriguing enough to leave their listeners wanting more.  This is a group to watch/listen to. 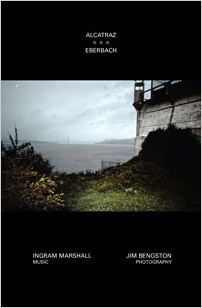 The music of Ingram Marshall (1942- ) first came to my ears via the New Albion recording of the Gradual Requiem (1994) written in memory of his father.  The spare sounds in this abstract electroacoustic piece remind one of the music of Harold Budd or the ambient music of Brian Eno.  Like them Marshall has developed a unique and significant voice drawing from methods including minimalist repetition, drones and static harmonies.  He also incorporates electronic music techniques and the techniques of the modern recording studio as well as non-western tunings and instruments.  But even given all the comparisons and qualifiers it is difficult to describe his voice because it is a unique style that, once heard, will leave it’s stamp of individuality much as the distinction between the above-named artists or, for that matter between a Mozart vs. Haydn style.  Very difficult to describe in words alone. Now a visiting professor of composition at Yale School of Music, Marshall has had a successful career as a professor, composer and performer.  He has written for a variety of instruments including electronic sounds, piano, guitar and voices as well as for chamber and orchestral groups.  He has released 8 (now 9 with the present DVD) albums.

Jim Bengston (1942- ), born in Evanston, IL developed an interest in photography while in the army.  His work will be familiar to music fans through his work on many albums including the characteristically beautiful photographs seen on albums from  ECM.  His work has been exhibited at MoMA, Art Institute of Chicago, Walker Art Center, National Museum of Art, Architecture and Design in Oslo, Lillehammer Art Museum and many others.

Jim Bengston in his studio 2009

Starkland pioneered a wonderful DVD audio release in 2000 (which includes Marshall’s ‘Sighs and Murmurs’) called Immersion which contained works commissioned for the new Dolby 5.1 system, the first disc of it’s kind and still a landmark production.  Now comes this DVD from the always interesting Starkland records of two collaborative works between these fine artists making full use of the medium.

Like that earlier disc, this is a venture into another type of art object.  The disc contains musical tracks and a series of photographs leisurely timed with the flow of the music.  But this is not a commercial DVD experience of a film nor is it a traditional slide show.  It is not didactic and only incidentally linear.  It is not just a piece of music for listening either.  The experience that I come away with is more of a hybrid experience of something like a living electrovisualacoustic sculpture (sorry for the improvised neologism).

Alcatraz is a 1991 piece realized on tape as is the companion piece.  It is a sonic reworking by the producers into Dolby 5.1 surround sound.   Here it is paired with photography lovingly displayed on the video format by Jim Bengston.  There is a second work on the disc which is a fitting companion piece called Eberbach (1985) after the abandoned monastery Kloster Eberbach in Germany.  Both works are video sequences of images by the photographer accompanied by Marshall’s hypnotic, impressionistic and elegiac  music.

The audio version of Alcatraz was originally released on a New Albion disc in 1991 and Eberbach (the first two of the “Three Penitential Visions”) was released on a Nonesuch disc in 1985.  According to the liner notes the two artists, who first met at Lake Forest College in Illinois, had been discussing a collaboration such as this for many years and a quick look at the copyright info confirms the dates of the photography to 1984 and 1985 for Alcatraz and Eberbach respectively.  They reportedly exchanged photos and cassette recordings for some time  and the quality of their collaboration is apparent.  And now this formerly languishing collaboration is now completed as it was intended with the release of this DVD.

The first work, Alcatraz consists of environmental sounds as well as electronic music and recorded acoustic instruments.  Marshall creates a glowing ambient texture attempting to reflect the history of the famous prison island in the San Francisco Bay.  The piece is in 7 sections nicely divided into tracks.  Each section reflects different aspects of the prison and the location.

The first section is a minimalistic piano piece which has added ambiance apparently from some added electronic manipulation adding a slight echoing which reflects the open empty reflectively resonant chambers of the stone confinements of the old prison structures.  It is followed by some musique concréte incorporating sounds of the prison environment like the ominous slamming of a metal cell door and its echo.  These sounds are manipulated with minimalist techniques of repetition creating a disturbingly oppressive memory of a sound which cannot ever have had a happy connotation for anyone.  And, of course, throughout the stark, at times almost colorless photographs flow in a gentle rhythm from one to another with a few instances of “jump cuts” or quicker transitions.  One gets the sense almost of the visual and sonic events having been co-composed into this hybrid art form.

Eberbach is based on impressions by the artists of Kloster Eberbach, the first Cistercian Monastery which was established in 1136 by Saint Bernard of Clairvaux.  It is no longer in use as a monastery but is actively used as a concert space, wine tasting space (there is a large vineyard and winery on the property which is run by the state) and has been used for scenes in films such as ‘The Name of the Rose’.  It is in fact an acknowledged architectural heritage site as it preserves fine examples of architecture from Romanesque, Gothic and Baroque periods.

Eberbach was conceived and works as a companion to the first piece in several ways.  The same attention is paid to the use of environmental sounds as well as use of conventional instruments to evoke the scenes depicted in Bengston’s photographs.  Both the prison and the monastery are about isolation from the larger society, monks in their cells, prisoners in theirs. The original recordings were mastered by Bob Shumaker and the current surround sound mix was done by the equally talented Tom Lazarus.  Photo to digital transfers were done by Lavasir Nordrum Design.  Executive producer Thomas Steenland did the design of the package and the DVD menus.