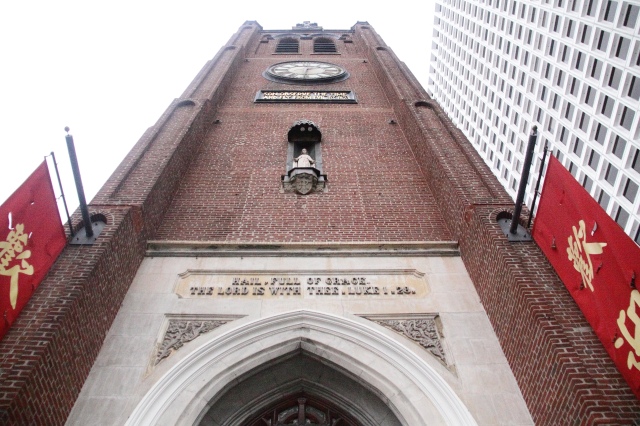 A much needed light rain fell as I ventured out to hear Lara Downes play at the noontime concert series at Old St. Mary’s Cathedral in San Francisco’s Chinatown neighborhood.  I had just recently reviewed this artist’s new CD release (here) and I jumped at the opportunity to hear her live.

The trip from my home in Alameda to this venue, a distance of some 15 miles took me almost two hours.  Construction rules right now.  In the course of the concert Ms. Downes commented that it took her 45 minutes to get there from her hotel in San Francisco (no doubt less than 2 miles).

Being familiar with this trip I managed to arrive at about 12:15PM.  When I arrived I was a bit surprised to find a service in progress so I sat quietly observing this beautiful little church.  Though raised Catholic I haven’t ventured into a church in some years.  The experience did place a sort of spiritual context on my concert experience.

The service ended a little after 12:30 and, after some of the congregants left I moved closer to the front.  Technicians moved the piano in place and Ms. Downes was introduced.

She chose to open with Robert Schumann’s (1810-1856) Op. 12 Fantasy Pieces Nos. 1, 2, 3 and 5 (1837).  I have but a passing knowledge of Schumann’s music.  It is highly virtuosic romanticism. Beautiful melodies, classical harmonies with just a dash of dissonance and a very high level of technical difficulty which characterizes these pieces.  Downes played them with confidence and ease seemingly casting a spell as she did.  She played the set without interruption and received much deserved applause from the somewhat sparse audience of perhaps 50 or so people.

She followed with a selection from her upcoming release America Again, Samuel Coleridge-Taylor’s (1875-1912) setting of the spiritual Deep River Op. 59 No. 10 (1905), one of a set of 24 so-called “Negro Melodies”. Coleridge-Taylor was a black British composer of the late 19th century sometimes referred to as the “African Mahler”.  This setting, very much in the same spirit as the Schumann was pretty much what one might have expected had Schumann encountered black spirituals.  This selection added again to the spiritual dimension.  Deep River is a majestic and celebratory piece which, like the Schumann, was well received.

Downes deviated from the printed program to play another selection from that forthcoming album, Morton Gould’s (1913-1996) American Caprice.  This short piece was a delightful foray into jazz reminding us of Gould’s connections with his contemporaries like Aaron Copland and George Gershwin.  Gould is a composer whose work deserves more attention and this listener is grateful to the artist for bringing this little masterpiece back into the light.

In some ways this functioned like a precursor to the next piece on the program, Gershwin’s (1898-1937) Rhapsody in Blue (1924) in the composer’s arrangement for solo piano. Downes, whose speaking was as comfortable and natural as her playing, asked the audience to try to hear this oh so familiar piece with new ears.  Indeed her fluid and dynamic playing put her own stamp on this popular gem and demonstrated again her seasoned virtuosity.  She played the work with passion but also with ease and confidence.

The ample applause and standing ovation brought her back for a wonderful encore.  It was Gershwin again for sure but this time in an amazing arrangement by Nina Simone (1933-2003) whose spirit seemed to be channeled by Downes.  “I loves you Porgy” from Porgy and Bess is featured on her new CD and it brought the afternoon to a very pleasing close.

I took the opportunity to meet and thank Ms. Downes who was, in turn, gracious and pleasant.  I went back out to the ordinary world charmed and invigorated and that is what I had hoped for.