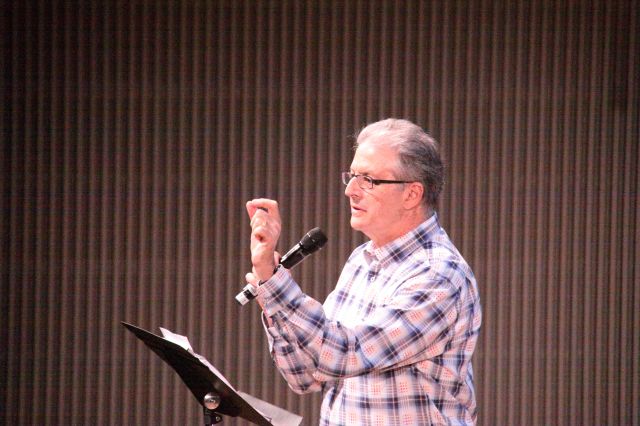 Other Minds has been the the darling of composer/producer Charles Amirkhanian since its founding in 1993.  Along with television producer and arts patron Jim Newman he has presided over the 25 years of this renowned festival which has consistently brought the finest new music composers and performers to San Francisco.

There is little doubt that this year’s festival has to be very close to Amirkhanian’s heart.  Words have been central to his career at least since 1969 when he began his work as a producer at KPFA.  In the 23 years he spent there he presented countless hours of musical programming and interviews.  He crossed paths with most of the major stars in contemporary classical music and many stars whose genre may not be captured by the classical label.  A look at his programming choices and interviews from his time there defined new music for the Bay Area and beyond.  After his tenure at KPFA ended in 1992 he continued exploring cutting edge music and musicians bringing them to San Francisco for live performances.

“Word! Thou word that I cannot speak!

At the end of the second (and last completed) act of Arnold Schoenberg’s powerful opera “Moses und Aron” (1932) Moses sings, or actually half speaks and half sings this text lamenting his expressive deficits.  Speech song or, in German, sprechgesang is an invention by Schoenberg in which the singers are asked to find a point between speech and music.  Perhaps this is a good example of some of the artistic thinking going on at about the time when speech music/sound poetry began to take shape. 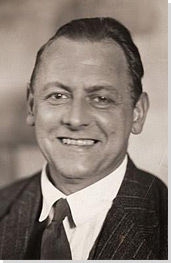 Some of the history of sound poetry is featured in this unprecedented 6 day festival (April 9-14).  Some of the earliest practitioners of this unusual genre include the German artist Kurt Schwitters whose composition Ursonate (1922-32) will be performed in its entirety, a rare event by itself.

Another early gem will be the Spoken Music (1930) by German-American composer Ernst Toch.  This three movement suite has been known for its last movement, the Geographical Fugue.  The other two movements, once thought lost, were discovered in sketches in 2006 and reconstructed by Christopher Caines.  The now complete version will be presented I believe on day 3.

It is beyond the scope of this blog post to tell the history of text sound so I will refer readers to the Other Minds website for further details.  Or you could come to the festival too I suppose.

With due respect given to the past the festival will move on to the present.  San Francisco Beat Poet Michael McClure (1932- ) will make an appearance as will post beat colleagues Anne Waldman (1945- ), Clark Coolidge (yeah the guy from that cool anthology), Aram Saroyan (another guy from the classic text sound disc).

Other Minds alumnus Alvin Curran (1938- ) will be premiering his collaboration with Clark Coolidge entitled, Came Through in the Call Hold.  Curran’s eclectic sensibilities will doubtless result in an interesting composition.  This event alone, at least for this writer, is worth the price of admission.  And this is just the first day!

Other events include workshops, discussions of the history of the art, and even some curious variations on a theme.  Apparently the writer Lawrence Weschler is the grandson of Ernst Toch and has written a variation on the Geographical Fugue called, The Medical Fugue which will be premiered at this festival.

The increasingly ubiquitous pianist Sarah Cahill will be present to perform Virgil Thomson’s unusual but entertaining setting of a Gertrude Stein (a one time Oakland resident) text called Capital, Capitals.  She will accompany the men of the Other Minds Ensemble.  Jaap Blonk will be tasked with performing Schwitters’ Ursonate and, along with Enzo Miranelli will also perform other historical works including some by a couple of Italian Futurists.

Other Minds Administrative Director Randall Wong will end the evening by undertaking a performance of the late great Cathy Berberian’s Stripsody.  That promises to be a wild evening I think.

Northern Europe, including the Netherlands and the Scandinavian countries will literally have their day.  As it turns out they are doing a great deal of creative work in this increasingly diverse genre of speech music.  Other Minds is at its best in introducing the new and the innovative from wherever Charles’ radar has tracked it down.  Indeed Mr. Amirkhanian and his wife, artist/photographer Carol Law traveled throughout these regions in the early 70s talking with and learning from these diverse artists.  (Amirkhanian’s work, Just was recorded in a Scandinavian studio during one of those trips).

As usual homage will be paid to the past with some recorded classics by Sten Hanson, Åke Hodell, and Lily Greenham.  Some new voices will be introduced including Tone Åse and Sten Sandell.  The Norwegian/Russian-American duo OTTARAS (consisting of visual poet Ottar Ormstad and composer Taras Mashtalir will also perform.   One can fully expect a mind expanding experience which will redefine the possibilities of the art form.

Auspiciously or perhaps dangerously Friday the 13th has been reserved for Bay Area talents.  First up will be the man of the hour, Charles Amirkhanian.  Hearing him do his work live is an uncommon but entirely enjoyable experience.  If that alone weren’t enough we will get to hear the even rarer public collaboration between him and his life partner Carol Law whose photography and collage work deserves wider recognition and will happily get that here. 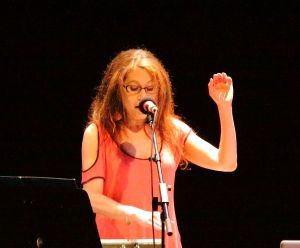 Trained in both linguistics and music, Amy X Neuberg will be on hand to perform her indescribable electronic cabaret including the world premiere of “Say it like you mean” and other genre bending work.  She is another valued Other Minds alumnus having given numerous performances at the festivals.

Stanford professor Mark Applebaum, another alumnus will present “Three Unlikely Corporate Sponsors” which premiered at Stanford in 2016.  Enzo Miranelli will conclude the evening with his theatrical combination of movement and text in “Fame: What I Want to Say”.

The festival concludes on Saturday April 14th with Jaap Blonk followed by the wonderful San Francisco based Pamela Z who, like Neuberg uses electronics, but creates her own unique sound world.  She too is an alumnus of Other Minds.

Another composer from that great anthology, Beth Anderson, will make an appearance to perform “If I Were a Poet”, “I Can’t Stand It”, and “Ocean Mildew Minds”.

The finale will feature Susan Stone and Sheila Davies Sumner performing excerpts from two works, “House with a View” and “Loose Tongues” both dealing with the lives of working class southern women.

This will be both a feast and a marathon but it promises to be one of the finest Other Minds productions maybe ever.  Come to be entertained, come to be challenged, come to expand your mind.  You’ll never be the same.  See you there.

One comment on “In the Beginning Was the Word: Other Minds 23”