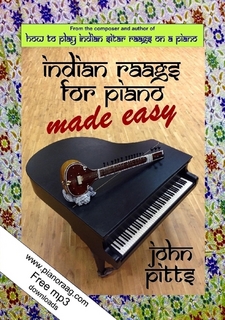 Last year I reviewed Mr. Pitts’ How to Play Indian Sitar Raags on a Piano.  It was an enthusiastic review and the book continues to have a valued place on my piano as it opens a whole world of ideas.   Now the author has done a kind and useful service by issuing this simplified version of that work.

In fact this simplified version is more in line with the rather unpracticed keyboard skills of your humble reviewer.  The author chooses 6 raags or ragas which provide a good starting point for similarly humble musicians to begin this approach to Hindustani music.

Hindustani music became pretty much ubiquitous, or at least familiarly cliché in western musical culture largely due to the efforts of Indian musicians such as Ravi Shankar and Alla Rakha.  In fact it is an endlessly fascinating musical system whose logic has much to offer both musicians and composers.

In the past one had to learn traditional Indian instruments to gain much familiarity with these ancient musical systems but Pitts’ book offers an alternative to musicians whose familiarity is limited to the western keyboard.  Purists may denigrate this approach but even if it does not perfectly represent all aspects of Hindustani musical theory at least it provides a manageable entry point for amateur musicians and professionals alike.

Having struggled somewhat with the previous book I was particularly delighted to have these simplified examples which fall nearer to my skills level.  Even if I don’t wind up incorporating this into performance or compositional efforts I have no doubt that the exposure to the actual practice of this music will leave a valuable bit of programming in my neural circuits that will enhance my musical thinking and ability to appreciate other musics.

As with the first book, this too is highly recommended.  Kudos Mr. Pitts!

One comment on “Indian Raags for Piano made easy”