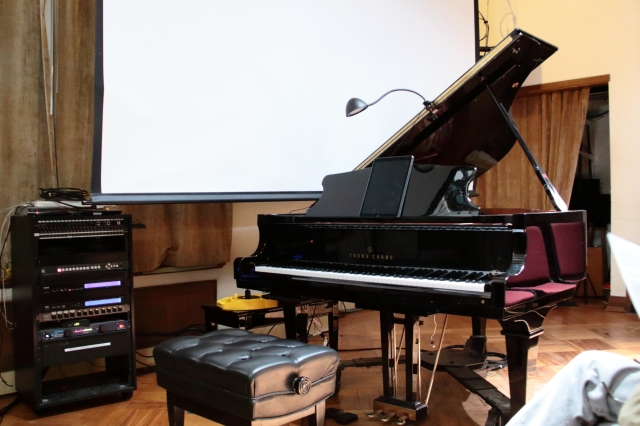 All is set up in the diminutive performance space at CNMAT.

Jenny Q. Chai is a graduate of Curtis Institute and the Manhattan School of Music.  She is trained as a pianist but she is in the process of expanding that role somewhat.  Chai is one of an unusual group of people called “synaesthetes”, that is, people who see sounds and hear colors.  Her program tonight is entitled, “Sonorous Brushes”.

I am not a synaesthete and it is most likely that most of the audience was more like me.  The actual prevalence of synaesthesia in which stimulation of one sense (such as sound) simultaneously stimulates another sensory or cognitive pathway (such as color or emotion) is estimated to occur in about 4% of the general population (estimates vary).  This condition is unusual but is not pathological.  The interest or the challenge here is the artist’s attempt to convey her personal synaesthetic perceptions in a way that can be understood by those not similarly wired. 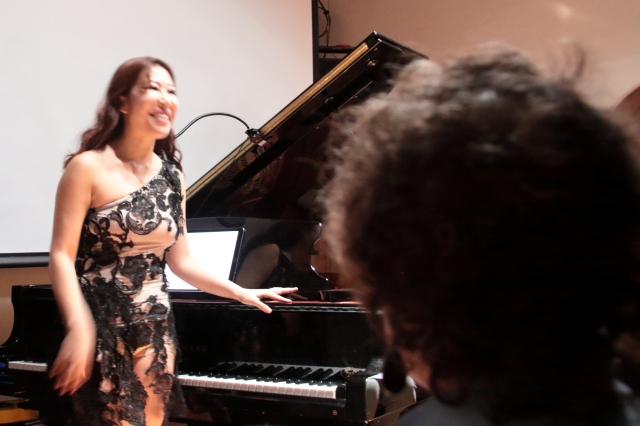 Chai spoke eloquently about her research to the audience.

The program was divided into sections.  In the first Chai performed some mostly conventional repertoire from the early twentieth century namely Debussy, Ravel, Messiaen.  The four Debussy pieces with which Ms. Chai opened this recital (two etudes, “Pour les huits doigts” and “Pour les quartes” and preludes 11 and 12 from book 2) left absolutely  and no doubt as to  and the artist’s virtuosity and interpretive skills.  She then launched into a Ravel homage by one Frederic Durieux followed by Ravel’s Oiseaux Tristes and a  truly athletic Messiaen piece.  Understandably these pieces inspired visual creations by this artist and seemed to be the seed for her ongoing research. 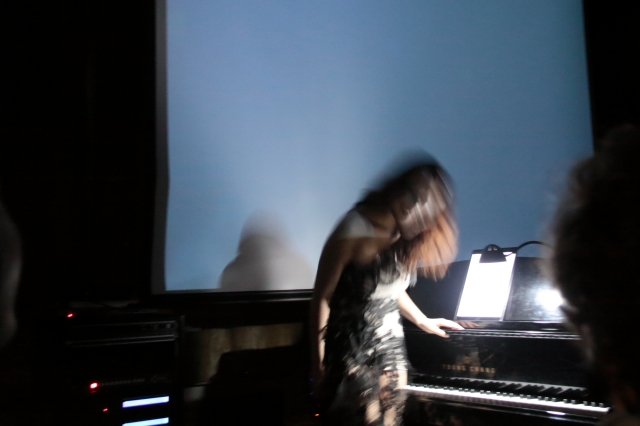 It is curious and somehow very fitting that this musical exploration begin with music that was inspired by the visual.  Impressionism was pretty much paralleled by the music which appears to have been inspired by the visual art, an early argument for synaesthesia.  There is little doubt that many artists (and non-artists) have had this condition for better or worse but it is likely that such unusual perceptions would have been classified as pathological and not the topic of polite conversation back in the 19th century and before. 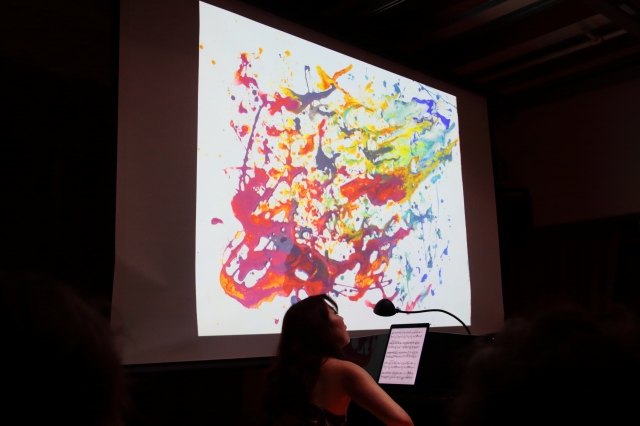 On this night it would be not merely a topic of conversation but an introduction to research which began with a grant Chai received from the French government for research into synaesthesia and presenting these ideas to a wider audience.  Far from pathology, this could even be seen as a deficit in those who lack this ability.  The key then is to explore synaesthesia as a potential asset.  Of course a complete and detailed explanation was not the goal of the evening.  This was to whet our appetites. 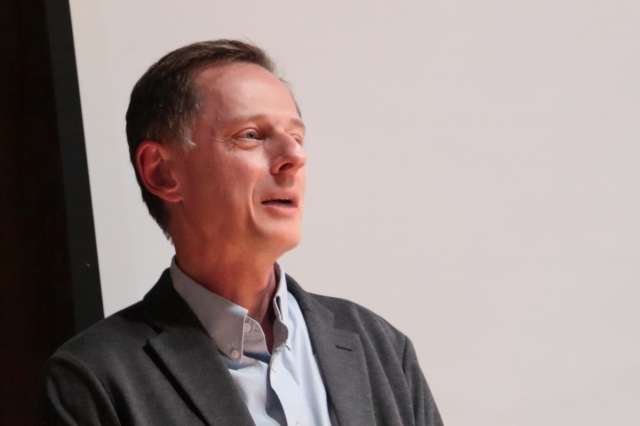 Composer Jarosław Kapuściński explains some of the technology behind his compositions and the visual art that accompanied these performances.

This next part of the program involved the work of Jarosław Kapuściński (Warsaw, 1964-) whose two pieces were slated for the last portion of the program.  He is, since 2016, the chair of the music department at Stanford University and no doubt spends time with CCRMA (Stanford’s equivalent of CNMAT) investigating music, sound and computers.  He spoke of being inspired by a calligrapher who was also well known to Ms. Chai, a Chinese woman and master calligrapher named Shanshan Zhao (the film was done at the Shanghai Conservatory of Music).  While he did not go into great detail the composer basically shared his visual inspirations and spoke a bit about how his composition program “listens” to the performer (see the photo with the two mikes inside the piano below) and responds in some way.  This sounds like another chapter in the book which includes David Behrman’s early computer/performer interactive experiments.  Some 50 years later (this piece, “Calligraphies for Ziqi” is from 2018 and got its US premiere here tonight).  Another generation shows its expertise. 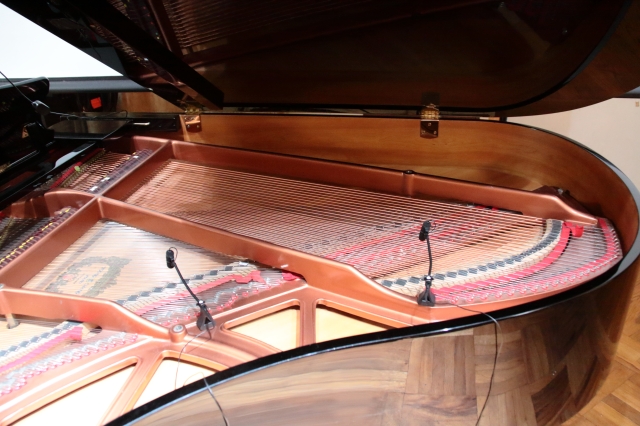 Note the two black microphones inside the piano. No, its not the Russians.

The title, “Calligraphies for Ziqi” (2018) references Ziqi, a man whose listening was so perfect that the musician destroyed his instrument after Ziqi died because he knew he would never find a better listener.  This ancient Chinese story (approx 770-476 BC) is also about the merging of sound and image in its way.  Several calligraphies are displayed in process during the performance with the music reflecting the moods of the Chinese characters being displayed.  Each movement involves a different Chinese character and a different attempt at calligraphy.  There may be extramusical references here but the music does a satisfying job of standing with the visuals and further analysis can be left to musicologists and program annotators.

In addition Kapuściński is no stranger to Asian arts.  He has explored eastern musics and incorporated aspects of them into some of his works.  He is also no stranger to computers and their use in composition.  His appreciation of disparate artistic techniques effectively spanning 5000 years and utilizing them effectively is a mark of genius in this writer’s opinion.  This is a challenging piece for the soloist but it is a sensual journey for the audience.  While the geekier folks (this reviewer definitely included) would like to know much more about the technical aspects of this gorgeous music, suffice it to say that such knowledge is not a prerequisite for enjoying the art. 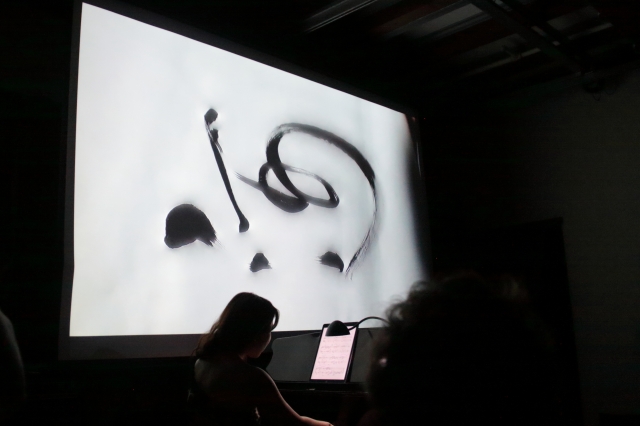 Chai playing the interactive piano part to the visuals in “Calligraphies for Ziqi” (2018), This was the California premiere.

This was followed by another visual/musical collaboration, Side Effects (2017) also by Kapuściński involves music set to videos by Kacper Kowalski who shoots from a perspective 150 meters directly above his subjects.  Think a latter day Koyaanisqatsi (do I need to footnote that reference?).  Again we see affecting music which captures the composer’s reaction to the visuals.  I didn’t get the sense that there was any computer interaction here, just some good music to some stunning visuals. 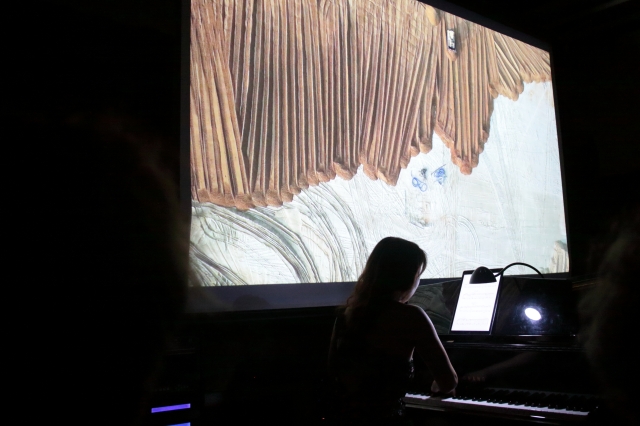 Chai playing the music to the visuals in “Side Effects” (2017)

The capacity audience (the room capacity is only 49) was very appreciative and gave a standing ovation which compelled no less than two encores.  Forgive your reviewer for not being able to recall the first but there seemed to be a new magic afoot when this pianist launched into the second, a wonderful rendition of the aria from Bach’s Goldberg Variations.  It was a loving and intense interpretation (no doubt full of colors as well) and it left the audience satisfied as a dessert would cap the climax of a fine meal.  Brava, Ms. Chai.  And thank you Mr. Kapuściński.